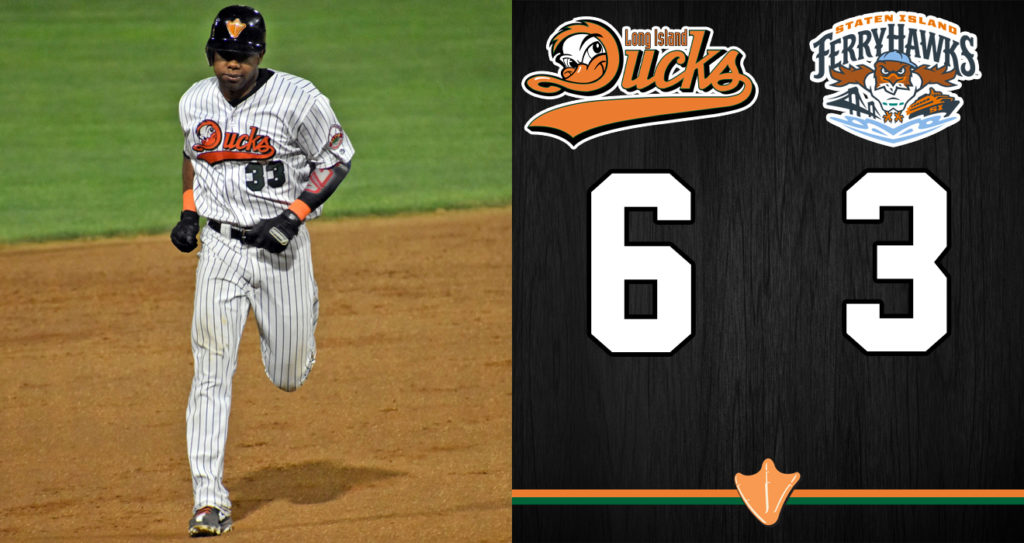 The Ducks opened the scoring in the first inning on an RBI single to right field off FerryHawks starter Hector Guance. Joe DeCarlo’s RBI single up the middle in the second extended the lead to two. Kevin Whatley then doubled the Ducks advantage to 4-0 in the fourth with a two-run home run to right field.

Staten Island cut their deficit in half in the fifth on Javier Betancourt’s RBI double to left and Dilson Herrera’s RBI single to left off Ducks starter Scott Harkin. However, the Ducks got one of the runs back in the bottom of the frame on Deibinson Romero’s RBI single down the right field line, making it a 5-2 game.

A run-scoring groundout off the bat of Betancourt in the seventh closed the gap to 5-3. Long Island got the run back though in the seventh when Alejandro De Aza launched a solo homer to right.

Harkin (7-6) earned the win, tossing six innings of two-run ball, allowing five hits and two walks while striking out four. Guance (2-5) took the loss, yielding five runs on 10 hits and three walks over five innings with three strikeouts. Tyler Webb picked up his eighth save with a scoreless ninth inning, striking out one.

De Aza led the Flock offensively with four hits, an RBI and three runs. DeCarlo added a hit, an RBI, a run and two walks.

The Ducks and FerryHawks continue their three-game set on Wednesday night. Game time is slated for 6:35 p.m., with the Fairfield Properties Ballpark gates opening at 5:35 (5:20 for full season ticket holders). Former New York Mets great Dwight “Doc” Gooden is scheduled to appear at the ballpark during the game. He is slated to throw out a ceremonial first pitch and is also scheduled to be signing autographs for fans on the main concourse for the first two innings of the game (limit one autograph per person). Right-hander Joe Iorio (6-3, 4.22) takes the mound for the Ducks against FerryHawks righty David Martinez (1-2, 6.26).