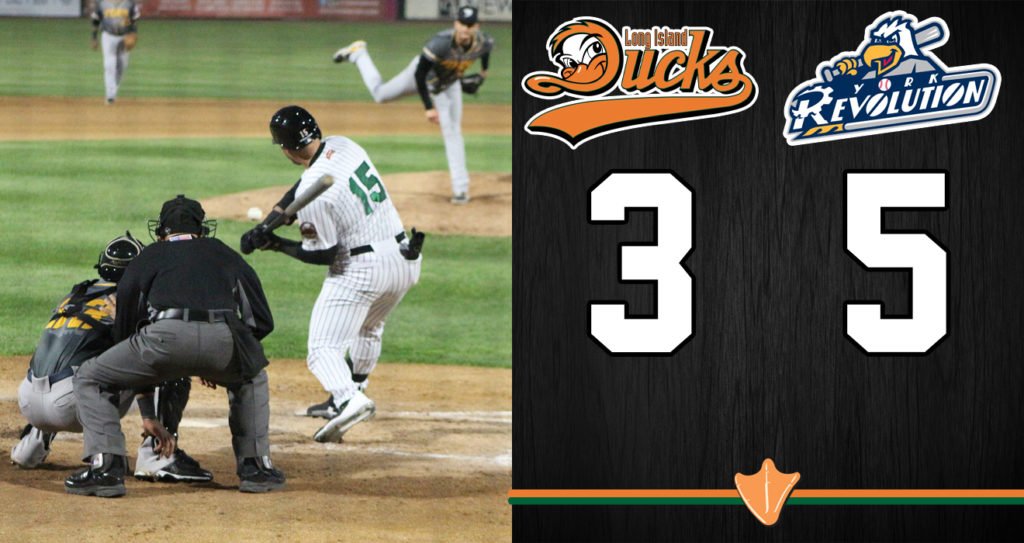 (Central Islip, N.Y., April 22, 2022) – The Long Island Ducks were defeated by the York Revolution 5-3 on Friday night in the opening game of the 2022 season at Fairfield Properties Ballpark.

York scratched across the game’s first run in the second inning on Jack Kenley’s RBI single to center field off Ducks starter Brett Kennedy. Long Island answered with an RBI single to left in the bottom of the frame from Deven Marrero to tie the game at one. Dustin Woodcock put the Ducks in front in the bottom of the fourth with a long solo home run to right off Revolution starter Alex Sanabia.

The Revs tied the game at two in the sixth on Nellie Rodriguez’s RBI infield single to third. However, the Ducks went back in front in the bottom of the inning on Rusney Castillo’s RBI double to left-center. It stayed that way until the eighth when York plated three runs on bases loaded walks to Carlos Franco and Rodriguez as well as a pinch-hit RBI single to left by Paul Mondesi, giving the visitors a 5-3 lead.

Neither starter factored into the decision. Kennedy went four innings, allowing one unearned run on four hits while striking out four. Sanabia lasted four innings as well, giving up two runs on three hits and four walks with two strikeouts. Robinson Parra (1-0) picked up the win after a scoreless seventh inning despite two walks. Frank Moscatiello (0-1) took the loss, conceding three runs on a hit and two walks. Jim Fuller earned his first save with a scoreless ninth despite allowing two hits.

The Ducks and Revolution continue their three-game set on Saturday night. Game time is slated for 6:35 p.m., with the Fairfield Properties Ballpark gates opening at 5:35 (5:20 for full season ticket holders). Following the game all fans will be treated to the first Fireworks Spectacular of the 2022 season, which will light the sky over the center field fence. It’s also a Lucky Seat Saturday, presented by Long Island MacArthur Airport. During the game, the Ducks will be selecting a lucky fan in the ballpark, who will win a free roundtrip for two to any of Breeze Airways’ 28 destinations. Left-hander Bennett Parry takes the mound for the Ducks against Revolution southpaw Austin Nicely.