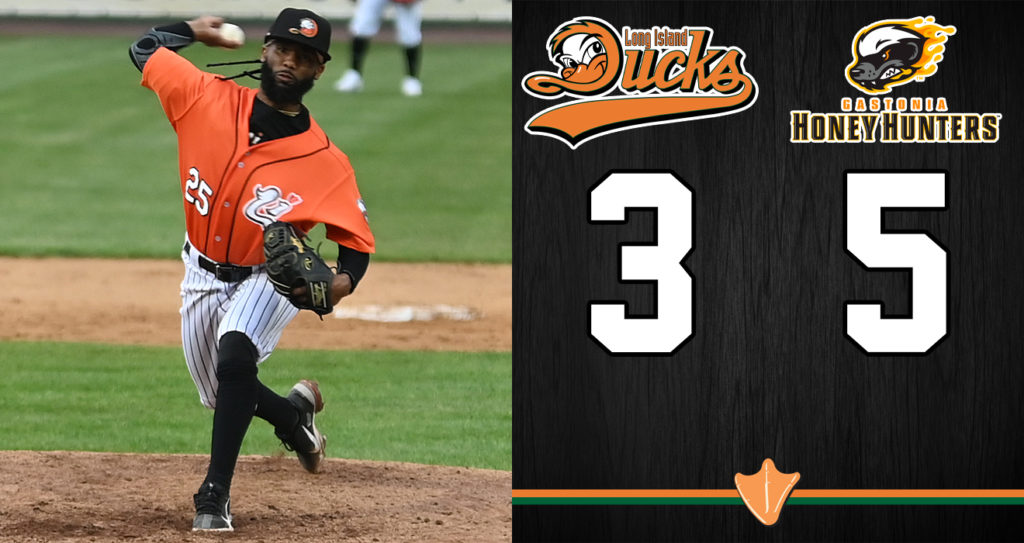 (Central Islip, N.Y., May 27, 2022) – The Long Island Ducks were defeated by the Gastonia Honey Hunters 5-3 on Friday night in the opener of a four-game series at Fairfield Properties Ballpark.

Gastonia plated the game’s first run on a bloop RBI single to right field by Luis Castro in the second inning off Ducks starter Anderson DeLeon. The Ducks tied it at one in the bottom of the inning on Deven Marrero’s sacrifice fly to right, which plated Joe DeCarlo.

Both teams then exchanged zeroes until the top of the ninth when a two-out grand slam to right field by Emmanuel Tapia gave the Honey Hunters a 5-1 lead. Long Island rallied for two runs in the ninth on Jake Zarrello’s RBI single to right and Lew Ford’s sac fly to right, but the Ducks were unable to pull even.

Neither starter factored into the decision. DeLeon fired seven innings of one-run ball, allowing seven hits and three walks while striking out four batters. Gunn lasted four innings, giving up a run on three hits and three walks. Sam Bordner (5-2) picked up the win with a scoreless eighth inning, working around a hit and a walk. Sandy Baez (1-1) suffered the loss, surrendering four unearned runs on two hits and four walks over two innings with a pair of strikeouts.

The Ducks and Honey Hunters continue their four-game series on Saturday night. Game time is slated for 6:35 p.m., with the Fairfield Properties Ballpark gates opening at 5:35 (5:20 for full season ticket holders). Following the game, all fans in attendance will be treated to a Fireworks Spectacular. It’s also a Lucky Seat Saturday, presented by Long Island MacArthur Airport. During the game, one lucky fan will win a free roundtrip for two to any of Breeze Airways’ 28 destinations. Right-hander Akeel Morris (0-3, 8.31) takes the mound for the Ducks against Honey Hunters lefty John Anderson (2-3, 2.14).