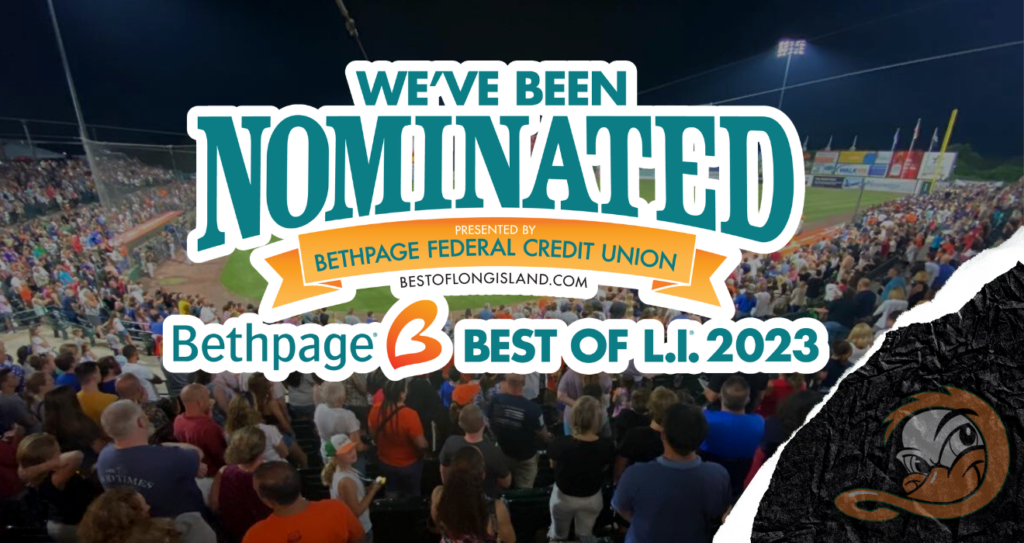 (Central Islip, N.Y., Oct. 3, 2022) – Voting has begun for the 2023 “Best of Long Island” contest. The Long Island Ducks have been included among the nominees for seven different awards in this year’s competition, and fans may vote once per day from now through Thursday, December 15th.

To vote for the Ducks, please CLICK HERE. Select any section and award the Ducks are nominated in and then click “Vote” next to the desired nominee.

QuackerJack has been nominated as Best Long Island Mascot in the Arts & Entertainment section. QJ has garnered this award a record 11 times! The lovable mascot remains a favorite among Ducks fans and Long Islanders as a whole, and he is the President of the Ducks Kids Club, presented by Bethpage Federal Credit Union. QuackerJack takes great pride in being heavily involved throughout the Long Island community.

Additionally, the Ducks have been nominated for Best Twitter Account from Long Island under the Arts & Entertainment section. Twitter (@LIDucks) remains one of the best ways to follow along with Long Island’s hometown team. The Ducks provide fans with news stories, in-game updates, behind-the-scenes content and so much more on Twitter. With over 11,600 followers, the popularity of the Ducks on Twitter has consistently grown each season.

For a 15th consecutive year, the Ducks have been given a team-specific honor – Best Long Island Duck – in the Sports & Activities section. Fans can vote for one of 14 members from the 2022 roster. Last year, Atlantic League Player of the Year Steve Lombardozzi received the honor. Right-handed pitcher Joe Iorio earned the award the previous two seasons, while Ducks all-time hits leader Lew Ford was selected in each of the previous five years.

Fairfield Properties Ballpark, the home of the Ducks, has also been nominated once again in the Sports & Activities section for Best Family Amusement Place. This past season, the Ducks welcomed 285,888 fans to enjoy good times, every time, at the ballpark, the most among all MLB Partner Leagues. An Atlantic League leading average of 4,538 fans per game were treated to exciting promotions, including the best fireworks show on Long Island, and a plethora of fun.

Finally, the Ducks are among the nominees for three categories in the Food section of the contest. Nathan’s hot dogs remain a favorite among Ducks fans and are up for the Best Hot Dog award. Those loving the smell and taste of French fries at the ballpark can vote for the Ducks for Best French Fries. Additionally, the always-popular pretzels from Philly Pretzel Factory, which have been served at the ballpark since 2019, are among the choices for Best Soft Pretzel.