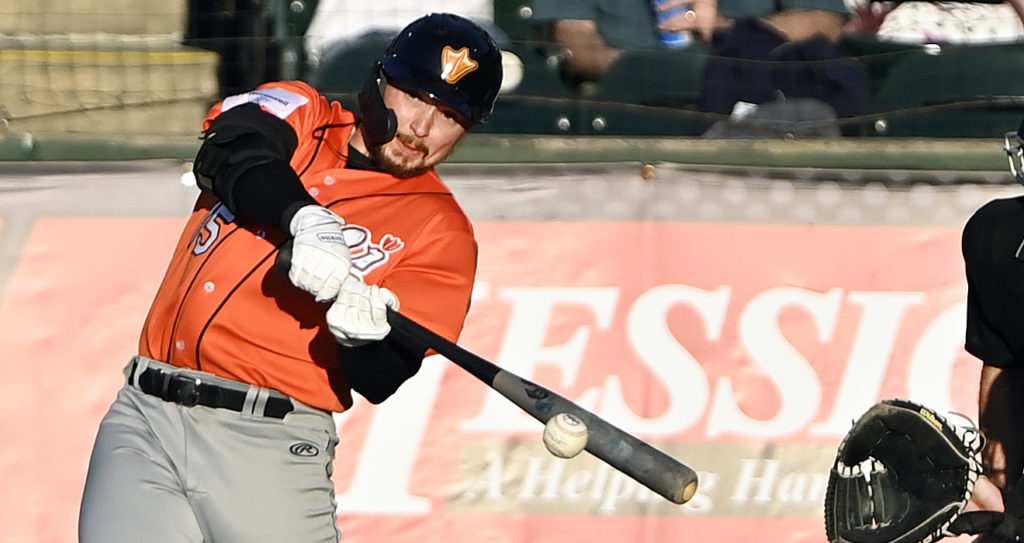 Barnstormers' v Ducks' during first inning action of an Atlantic League baseball game at the Clipper Magazine Stadium in Lancaster Wednesday May 11, 2022.

(Lancaster, Pa., August 11, 2022) – The Long Island Ducks were defeated by the Lancaster Barnstormers 12-10 on Thursday evening in the rubber game of a three-game midweek series from Clipper Magazine Stadium.

Lancaster jumped out in front 5-0 in the bottom of the first inning against Long Island starting pitcher Ryan Meisinger with a pair of two-out hits, the former of the RBI infield single variety and the latter coming by way of an opposite-field grand slam home run to right off the bat of Anthony Peroni. The Ducks cut the deficit to 5-3 in the third versus Barnstormers starter Erik Manoah courtesy of a two-run single off the bat of Vladimir Frias that scored Alejandro De Aza and Dustin Woodcock and an RBI base knock produced by Matt Chamberlain that enabled Joe DeCarlo to cross the plate.

Trailing 8-3 in the fifth, the Flock stormed all the way back as they sent 11 men to the plate and scored five runs to tie the ballgame at eight. DeCarlo began the scoring production by driving home Carlos Castro with a two-base hit. Chamberlain brought in Woodcock with an RBI groundout, and two batters later Lew Ford plated DeCarlo and Frias wit a bae hit of his own right back through the originator. The rally concluded when Deibinson Romero was hit by a pitch for the second time on the night as this one came with three Ducks on the pond and scored Phil Caulfield with the tying run.

Down 10-8 in the sixth, the visitors cut Lancaster’s lead in half when Caulfield was plunked with the bases loaded which scored Woodcock. Long Island got even in the seventh on a free pass issued to Chamberlain with three runners on base that scored Woodcock to tie the contest up at ten apiece. In the eighth the Barnstormers score twice against Tyler Webb on a two-run single off the bat of Joseph Carpenter against a drawn in Long Island infield and it proved to be the difference as Lancaster was able to hang on despite their pitching staff issuing 16 walks overall, a new single-game franchise record set by the Ducks offense.

Both starters registered a no-decision, with Meisinger surrendering eight runs on eight hits (one home run) in three innings pitched, walking and striking out three, while Manoah allowed eight runs on seven hits across four and two-thirds innings of work, walking seven while striking out three. Dominic DiSabatino (6-3) picked up the win after firing an inning and a third of scoreless and hitless baseball, walking and striking out one. Tyler Webb (2-3) suffered the loss after giving up two runs (one earned) on two hits n one inning on the mound, striking out two in the process. West Tunnell closed things out for his eighth save of the season. DeCarlo and Chamberlain had two hits apiece, while Woodcock and Frias each walked a season-best four times, with Woodcock also stealing a team-high three bases in defeat.

Long Island returns home on Friday, August 12, to begin a three-game set against the Charleston Dirty Birds. Game time is slated for 6:35 p.m., with the Fairfield Properties Ballpark gates opening at 5:35 (5:20 for full season ticket holders). It’s Suffolk County Boy Scouts Night, and the first 1,500 fans in attendance will receive Ducks Baseball Caps, courtesy of Dime Bank. It’s also an Angela’s Pizza Friday! A player on the Dirty Birds will be designated as the K-Man. If he strikes out during the game, all fans can show their game ticket to enjoy a special offer throughout the rest of the weekend at Angela’s Pizzeria of Islip. Left-Hander Stephen Tarpley (4-5, 3.74) gets the start on the mound for the Ducks versus Dirty Birds southpaw Denson Hull (2-7, 5.44).

Tickets for the game, and all Ducks games, are available by visiting the Fairfield Properties Ballpark box office, calling (631) 940-TIXX or CLICKING HERE. Those unable to make the game can follow all the action on the Long Island Ducks Broadcast Network. Live streaming HD video and audio will be available via BoxCast on LIDucks.com as well as the Ducks Facebook page and YouTube channel.