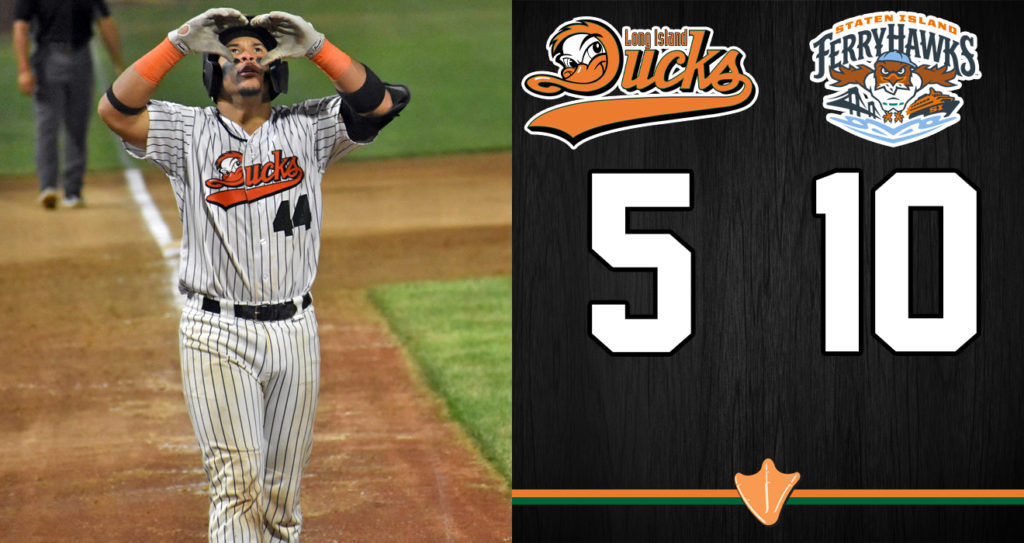 (Central Islip, N.Y., Aug. 16, 2022) – The Long Island Ducks were defeated by the Staten Island FerryHawks 10-5 on Tuesday night in the opener of a three-game series at Fairfield Properties Ballpark.

A sacrifice fly to left field off the bat of Ricardo Cespedes in the first inning gave the FerryHawks a 1-0 lead. An RBI single to right field by Antoine Duplantis in the second doubled the lead to two.

Staten Island ballooned the lead to 7-0 with a five-run sixth. RBI singles by Ricardo Cespedes, Mariel Bautista and Christopher Cespedes along with a two-run error did the damage. Long Island got on the scoreboard in the sixth when Phil Caulfield scored from third on a throwing error. However, Bautista’s RBI single and Justin O’Conner’s two-run single in the seventh extended the FerryHawks lead to 10-1.

Vladimir Frias’ RBI groundout and a wild pitch that scored Jose Sermo in the seventh closed the gap to seven. Carlos Castro then launched a two-run homer to left-center in the eighth, making it a 10-5 game, but the Ducks could not pull even.

The Ducks and FerryHawks continue their three-game set on Wednesday night. Game time is slated for 6:35 p.m., with the Fairfield Properties Ballpark gates opening at 5:35 (5:20 for full season ticket holders). It’s a Lemonade Stand at Main & Vine Wine Down Wednesday! All fans will be welcome to visit the Duck Club restaurant/bar to enjoy a wine tasting event of featured products. It’s also a Waddle In Wednesday at the ballpark! Fans will be able to purchase Ducks player wear shorts for just $20 (normally $35) in the Waddle In Shop throughout the ballgame. Right-hander Ryan Meisinger (3-2, 6.88) takes the mound for the Ducks against FerryHawks lefty Augie Sylk (5-9, 5.81).