DUCKS FIGHT BACK BUT FALL SHORT VS. BLUE CRABS 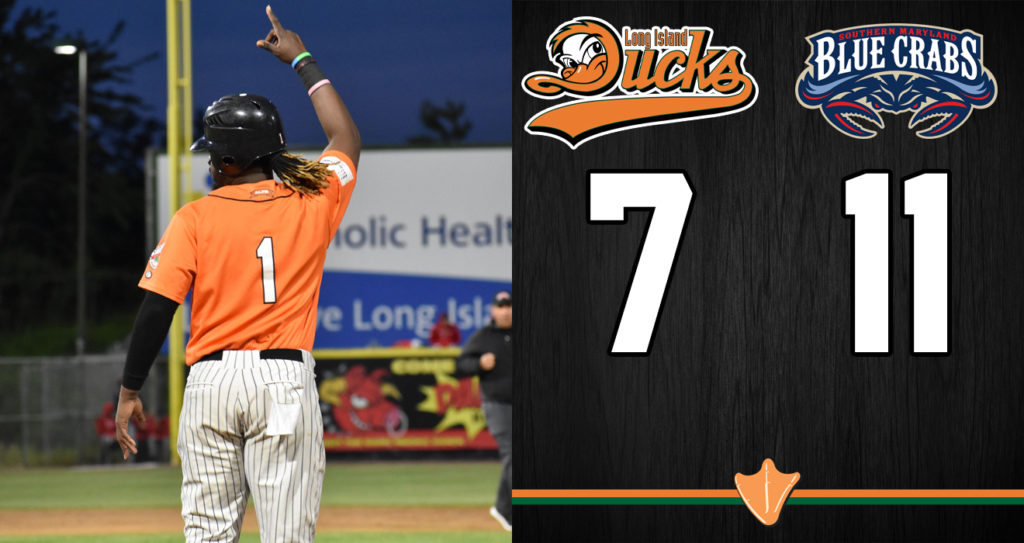 (Central Islip, N.Y., May 25, 2022) – The Long Island Ducks were defeated by the Southern Maryland Blue Crabs 11-7 on Wednesday night in the middle game of a three-game series at Fairfield Properties Ballpark.

Southern Maryland jumped out to an early lead, putting three runs on the scoreboard in each of the first three innings. Jared Walker’s RBI double, Jack Sundberg’s two-run double, two RBI singles by Raul Shah and an RBI single by Joe Luca highlighted the offense.

Deibinson Romero put the Ducks on the scoreboard in the bottom of the second with a solo home run to left field. Long Island then closed to within 9-4 in the fifth on Johnni Turbo’s run-scoring groundout to shortstop and a fielding error by Alex Crosby that scored Deven Marrero and L.J. Mazzilli. Dustin Woodcock’s pinch-hit RBI infield single in the seventh trimmed the deficit to 9-5.

The Blue Crabs opened up an 11-5 lead in the eighth on a solo homer to right-center by Walker and Zach Collier’s RBI double. However, a two-run homer to right in the bottom of the frame by Vladimir Frias brought the Ducks back to within four.

The Ducks and Blue Crabs wrap up their three-game series on Thursday night. Game time is slated for 6:35 p.m., with the Fairfield Properties Ballpark gates opening at 5:35 (5:20 for full season ticket holders). It’s a Thirsty Thursday at the ballpark! Fans will be able to enjoy a special buy one, get one half-price offer on all Budweiser and Bud Light products throughout the game. In addition, the VIP Duck Club restaurant/bar on the suite level will be open for all fans to enjoy. Right-hander Scott Harkin (1-3, 5.73) toes the rubber for the Ducks against Blue Crabs righty Daryl Thompson (3-1, 3.19).