DUCKS FLEX THEIR MUSCLES IN TRIUMPH OVER HONEY HUNTERS 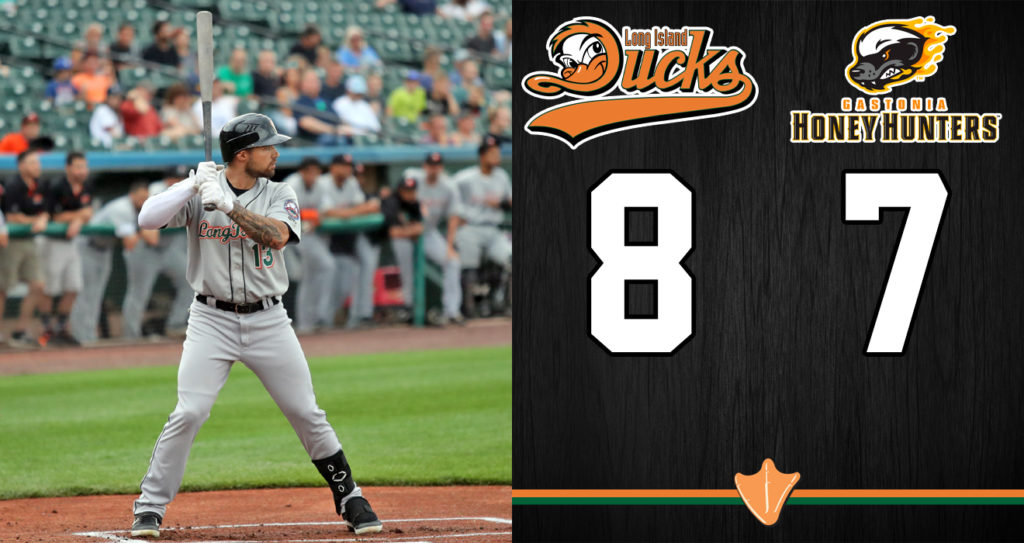 (Gastonia, N.C., May 31, 2022) – The Long Island Ducks defeated the Gastonia Honey Hunters 8-7 on Tuesday night in the opener of a three-game series at CaroMont Health Park.

The Honey Hunters took a 2-0 lead in the first inning on Joseph Rosa’s two-run home run down the right field line off Ducks starter James Varela. Gastonia made it 3-0 in their favor in the second frame courtesy of a run-scoring triple from Alex Holderbach.

The Ducks scored five times in the top of the third versus Gastonia starter Reilly Hovis to open up a 5-3 advantage thanks to run-scoring base knocks from Dustin Woodcock and L.J. Mazzilli and a three-run home run to right off the bat of Alejandro De Aza. Woodcock was at it again in the fourth as he launched a massive two-run home run over the batter’s eye in straightaway centerfield to make it 7-3 in favor of the visitors. A sacrifice fly in the seventh from Rusney Castillo scored Mazzilli with some much needed insurance as Long Island grabbed an 8-3 advantage. The Honey Hunters would get to within 8-7 with four runs in the home half of the inning but would get no closer as Tyler Webb retired the side in order in the last of the ninth for his team-leading fifth save of the season.

Woodcock, Mazzilli, De Aza, and Nick Bottari each had a pair of hits to lead the Flock, with Woodcock and De Aza plating three runs apiece.

The Ducks and Honey Hunters continue their three-game series on Wednesday night. First pitch is scheduled for 6:15 p.m. at CaroMont Health Park. Fans can follow all the action on the Long Island Ducks Broadcast Network. Live streaming HD video and audio will be available via BoxCast on LIDucks.com as well as on the Ducks official Facebook page and YouTube channel. Right-hander Anderson DeLeon (2-1, 3.08) gets the start for the Ducks against a pitcher yet to be announced for the Honey Hunters.