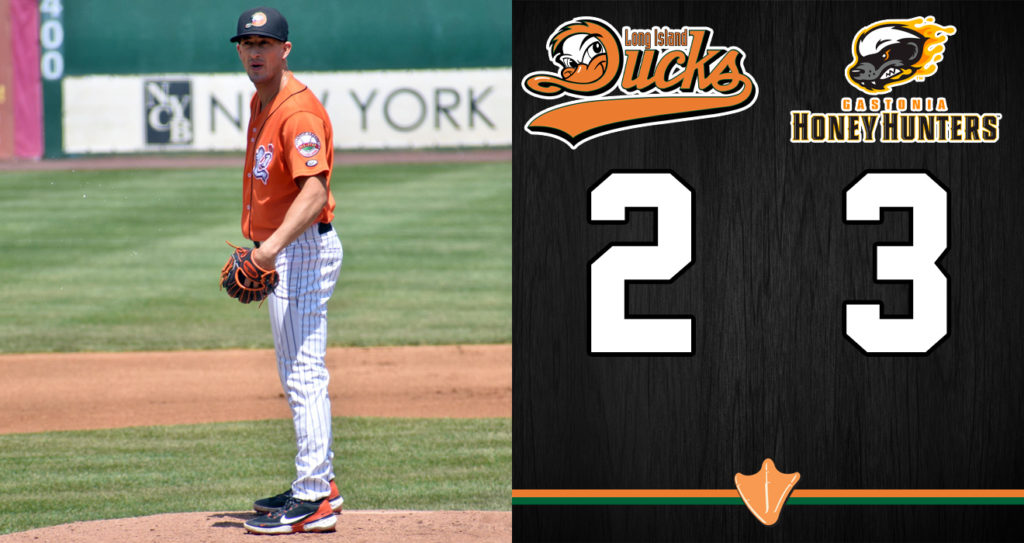 (Central Islip, N.Y., May 29, 2022) – The Long Island Ducks were defeated by the Gastonia Honey Hunters 3-2 in 10 innings on Sunday afternoon in the third game of a four-game series at Fairfield Properties Ballpark.

It stayed that way until the bottom of the seventh when Johnni Turbo’s sacrifice fly to center scored Dustin Woodcock, tying the game at two. Neither side dented home plate then until the top of the 10th when Joseph Rosa’s RBI single to left gave Gastonia a 3-2 lead.

Neither starter factored into the decision. Iorio tossed six innings of two-run ball, allowing seven hits and one walk while striking out three. Walden lasted seven innings, giving up two runs (one earned) on six hits and two walks with three strikeouts as well. Sam Bordner (6-2) picked up the win with a scoreless ninth inning, working around a hit. Tyler Webb (0-2) took the loss, conceding the winning run on two hits and three walks over two innings with a strikeout. Jesus Balaguer earned his fifth save with a scoreless 10th inning, working around a walk.

Turbo, De Aza and Deven Marrero each had two hits to lead the Flock. Turbo added an RBI and a run, while both De Aza and Marrero drew a walk as well.

The Ducks and Honey Hunters wrap up their four-game series on Monday afternoon. Game time is slated for 1:35 p.m., with the Fairfield Properties Ballpark gates opening at 12:35 (12:20 for full season ticket holders). Spend Memorial Day with the Ducks and take part in the always-popular “Bark in the Park”. Fans are invited to bring their dog with them to the ballpark to enjoy the holiday matinee, and no additional ticket purchase for a dog is required to take part in “Bark in the Park”. Left-hander Stephen Tarpley (0-1, 12.79) gets the ball for the Ducks against Honey Hunters southpaw Jerry Keel (2-1, 4.97).