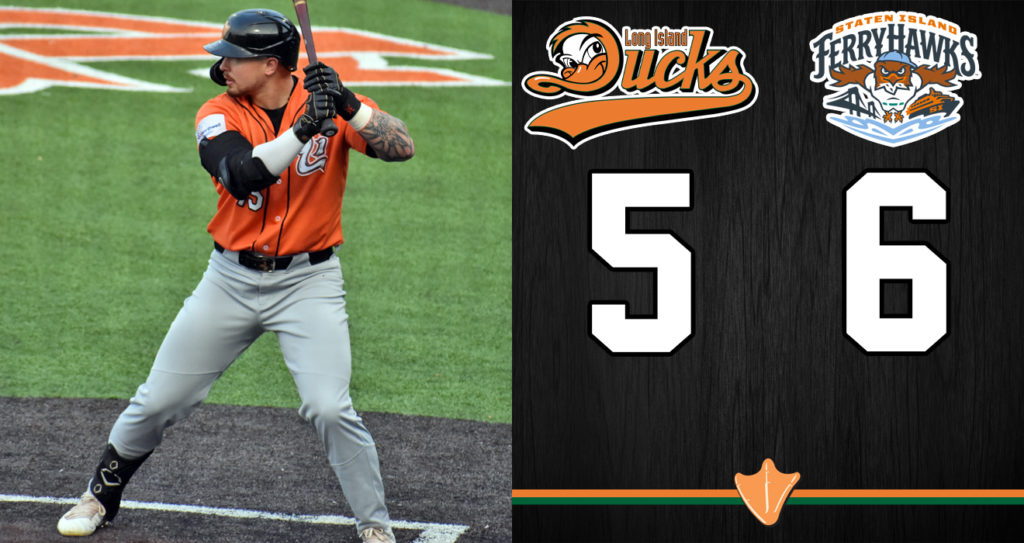 (Staten Island, N.Y., Sept. 17, 2022) – The Long Island Ducks were defeated by the Staten Island FerryHawks 6-5 in 11 innings on Saturday night in the middle game of a three-game series at Staten Island University Hospital Community Park.

Long Island closed to within two with a three-run sixth off FerryHawks starter Christian Capuano, highlighted by Trevor Achenbach’s two-run homer to left-center and Dustin Woodcock’s sac fly to left. Woodcock then tied the game at five in the eighth with a two-out, two-strike, two-run homer to right.

It stayed that way until the bottom of the 11th inning. Ricardo Cespedes advanced to third on a fielder’s choice and scored the winning run on a throwing error to end the game.

Neither starter factored into the decision. Varela lasted five and one-third innings, allowing five runs on seven hits and a walk with four strikeouts. Capuano pitched six innings of three-run ball, yielding six hits while striking out five. Victor Capellan (7-3) earned the win with three scoreless innings of relief, allowing one hit and one walk while striking out one. Patrick Quinn (1-1) took the loss, surrendering the winning run in two-thirds of an inning.

Phil Caulfield, L.J. Mazzilli and Carlos Castro each had two hits to lead the Ducks offensively, while Woodcock finished with three RBIs.

The Ducks and FerryHawks wrap up their three-game set and the 2022 season on Sunday afternoon. First pitch is scheduled for 4:00 p.m. at SIUH Community Park. Fans can follow all the action on the Long Island Ducks Broadcast Network. Live streaming HD video and audio will be available via BoxCast on LIDucks.com as well as on the Ducks official Facebook page and YouTube channel. Right-hander Joe Iorio (11-5, 4.69) toes the rubber for the Ducks against FerryHawks lefty Anthony Rodriguez (6-8, 4.84).