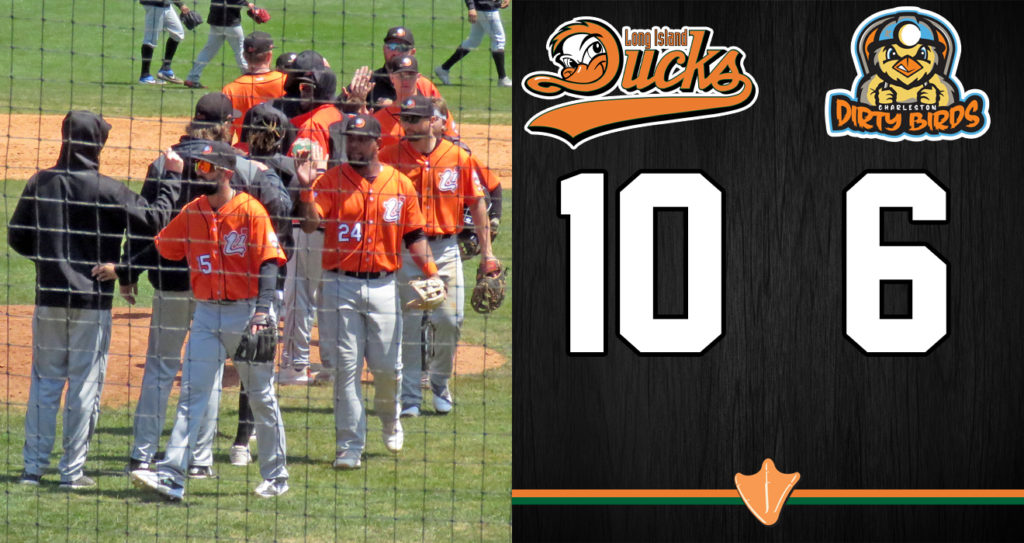 The Ducks erupted for five runs in the second inning of Dirty Birds starter Joe Testa to grab the early lead. A solo homer from Sam Travis, RBI doubles by Deven Marrero and L.J. Mazzilli, a run-scoring groundout from Mitch Calandra and a sac fly off the bat of Johnni Turbo did the damage. Calandra added an RBI single to left in the third, extending the Ducks lead to 6-0.

Three more runs in the fourth on Travis’ RBI groundout and RBI singles from Joe DeCarlo and Marrero ballooned the advantage to nine. Charleston got on the scoreboard in the bottom of the fourth on Tyler Blaum’s two-run triple down the left field line off Ducks starter Bennett Parry. Deibinson Romero’s RBI single in the fifth pushed the Ducks lead to 10-2, but a four-spot for the Dirty Birds in the bottom of the frame closed the gap to 10-6. However, Charleston got no closer.

Marrero led the Flock with three hits, two RBIs and a run. Mike Wielansky added three hits and a run, while DeCarlo had two hits, an RBI and three runs scored.

The Ducks continue their road trip on Friday night when they open a three-game series against the Lexington Legends. First pitch is scheduled for 6:35 p.m. at Wild Health Field. Fans can follow all the action on the Long Island Ducks Broadcast Network. Live streaming HD video and audio will be available via BoxCast on LIDucks.com as well as on the Ducks official Facebook page and YouTube channel. Right-hander Scott Harkin (0-0, 0.00) gets the start for the Ducks against Legends southpaw Thomas Dorminy (0-1, 37.80).