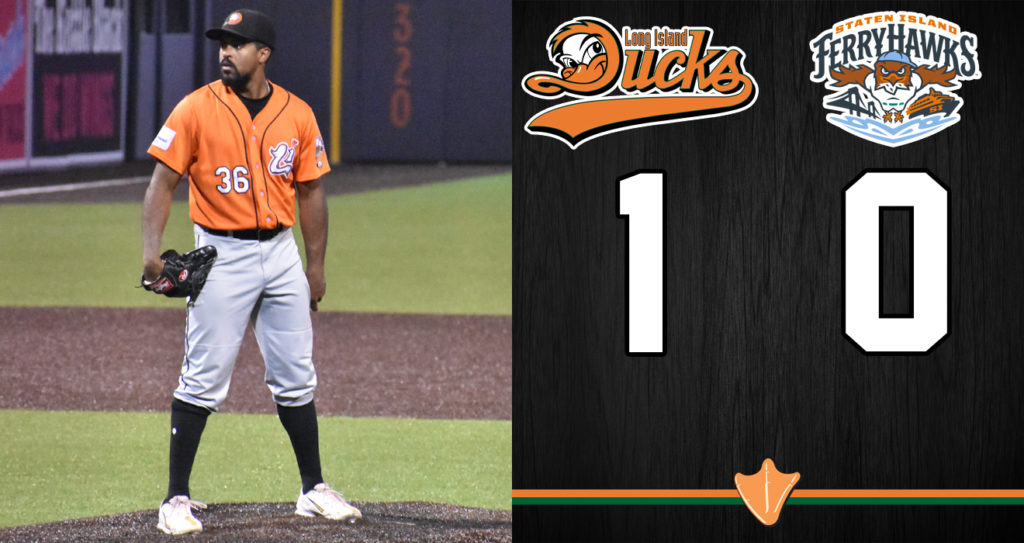 With the game scoreless in the last of the fifth, Staten Island had runners at the corners with one away, but Ducks starter Stephen Tarpley induced Bryan Gonzalez to bounce into an inning-ending 5-4-3 around-the-horn double play. The Ducks took a 1-0 lead against FerryHawks starter Dakota Freese in the top of the sixth courtesy of an RBI fielder’s choice off the bat of Alejandro De Aza that allowed Phil Caufield to score from third base after he drew a walk with one man down earlier in the frame. That was more than enough for Tarpley who had the Staten Island offense off-balance all evening long. The bullpen trio of Nick Goody, Tyler Webb, and Kai-Wei Lin did the rest, erasing all nine batters they faced, striking out four in the process, with Lin collecting his first save as a member of the Flock.

Tarpley (3-3) registered the victory, firing six scoreless innings on six hits allowed, walking one and striking out eight, extending his consecutive scoreless streak to 26.2 innings dating back to June 4th. Freese (1-4) was tagged with the loss after giving up one run on three hits across six innings pitched, walking two and striking out four. L.J. Mazzilli, Sam Travis (18 game on-base streak), and Deibinson Romero each had one of the three hits for the Ducks en route to the victory.

The Ducks continue their three-game series against the Staten Island FerryHawks on Wednesday night. First pitch is scheduled for 6:30 p.m. at Staten Island University Hospital Community Park. Fans can follow all the action on the Long Island Ducks Broadcast Network. Live streaming HD video and audio will be available via BoxCast on LIDucks.com as well as on the Ducks official Facebook page and YouTube channel. Right-hander Scott Harkin (4-5, 3.22) gets the nod for the Ducks against FerryHawks lefty Anthony Rodriguez (1-4, 7.71)