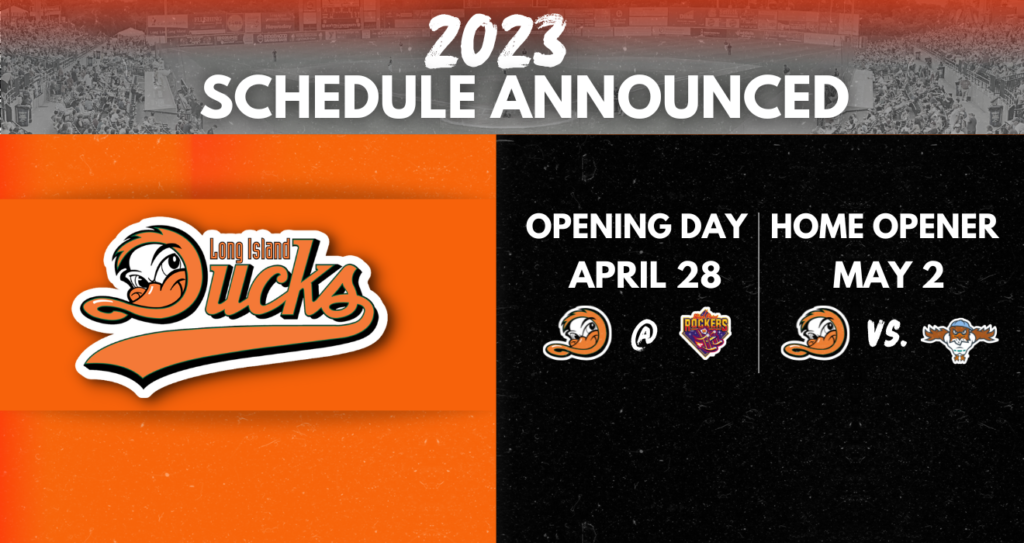 “We’re excited about launching our 23rd season on Long Island,” said Ducks President/GM Michael Pfaff. “There really is a lot to look forward to, including surpassing the 700-sellout mark, which we anticipate doing during the early portion of the 2023 season.”

The Ducks led all MLB Partner Leagues in attendance in 2022, marking the second consecutive year they have accomplished the feat since the formation of the new MLB structure. Over 40 professional clubs, playing throughout the U.S. and Canada in four separate circuits, make up MLB Partner Leagues.

The 2023 Ducks home schedule includes a challenging start, as Long Island opens up against the “Battle of the Belt” rival FerryHawks as well as the 2022 first and second half regular season South Division champion Gastonia Honey Hunters. In all, the Ducks 66-game home schedule is made up of 11 weekends (34 weekend games) and 32 weekday games.

There will be a new ALPB team on the slate when the season begins, as the Atlantic League of Professional Baseball Clubs, Inc. today announced Attain Sports and Entertainment has acquired a membership to join the circuit for the 2023 season. The new team, which will play in Frederick, Maryland, is included in the 126-game regular season schedule. Greg Baroni and Richard Roberts, owners of the Bowie Baysox of the Eastern League and the Frederick Keys of the MLB Draft League, are principals of Attain Sports and Entertainment. The new Frederick Atlantic League team will play alongside the Frederick MLB Draft League team at Nymeo Field at Harry Grove Stadium for the 2023 season.

A “Name the New Frederick Team” contest will take place in the coming weeks, along with an announcement regarding the team manager and coaching staff. The club takes the place of the Wild Health Genomes in the Atlantic League. The Atlantic League negotiating rights to the players on the Genomes 2022 roster will be protected for Frederick.

“The Atlantic League is very pleased to welcome our new partners in Frederick, Maryland,” said Atlantic League president Rick White. “They are fine operators with excellent reputations and will make fantastic members of the ALPB.”

Celebrating its 25th Anniversary season in 2023, the Atlantic League is Major League Baseball’s first Professional Partner League, a player gateway to the major leagues, and a leader in baseball innovation. ALPB has sent over 1,200 players to MLB organizations while drawing more than 45 million fans to its family-friendly ballparks throughout its 25-year history. Please visit www.AtlanticLeague.com.