DUCKS RALLY LATE TO EVEN SERIES WITH DIRTY BIRDS 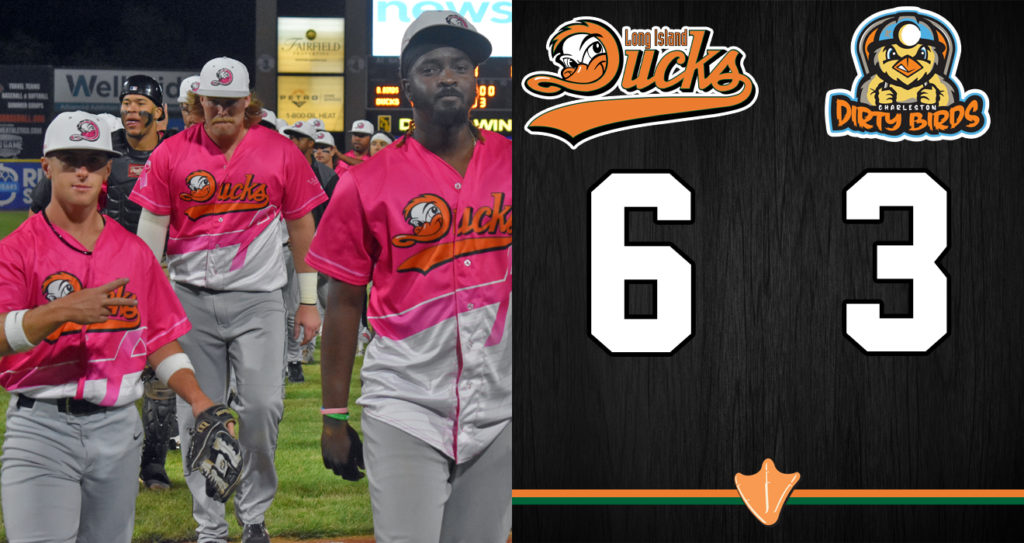 (Central Islip, N.Y., Aug. 13, 2022) – The Long Island Ducks defeated the Charleston Dirty Birds 6-3 on Saturday night in the middle game of a three-game series before a past-capacity crowd of 6,981 at Fairfield Properties Ballpark.

The Dirty Birds struck first in the opening inning on a sacrifice fly to center field by Nick Health off Ducks starter Akeel Morris. The Ducks answered with a three-run second off Dirty Birds starter Alec Kisena to take a 3-1 lead. Deibinson Romero’s solo homer to left field, an RBI single by Jacson McGowan and a run-scoring groundout from Matt Chamberlain did the damage.

Charleston rallied back to tie the game at three with single runs in the fourth and sixth on an RBI single to right by Scott Kelly and a solo homer to left-center from Diego Goris. It stayed that way until the bottom of the eighth when another three-run frame for the Flock gave them a 6-3 lead. Alejandro De Aza’s RBI double to right-center and Carlos Castro’s two-run single to left highlighted the inning.

Neither starter factored into the decision. Morris pitched five innings of two-run ball, allowing four hits and three walks while striking out a season-high seven. Kisena lasted five innings, giving up three runs on three hits and three walks with four strikeouts. Jose Jose (3-0) earned the win with a scoreless eighth inning, working around two hits while striking out one. Ryan Lawlor (6-3) took the loss, conceding three runs on three hits and two walks in one inning with two strikeouts. Tyler Webb picked up his 11th save with a 1-2-3 ninth, striking out two.

Castro led the Flock offensively with two hits, two RBIs and a run. Romero added a hit, an RBI, a run and two walks.

The Ducks and Dirty Birds wrap up their three-game set on Sunday evening. Game time is slated for 5:05 p.m., with the Fairfield Properties Ballpark gates opening at 4:05 (3:50 for full season ticket holders). It’s Summer Safety Fun Night, presented by Good Samaritan Hospital. The first 1,000 fans in attendance will receive Ducks Rally Towels, and Good Samaritan Hospital will be providing screenings for blood pressure and body mass index. It’s also a Sunday Family Funday, presented by Bethpage Federal Credit Union! Prior to the game, fans will be invited down for a Catch on the Field from 4:10 to 4:30. After the game, fans of all ages are also invited to take part in Kids Run the Bases. A starter to be determined toes the rubber for the Ducks against Dirty Birds lefty Joe Testa (0-5, 4.37).