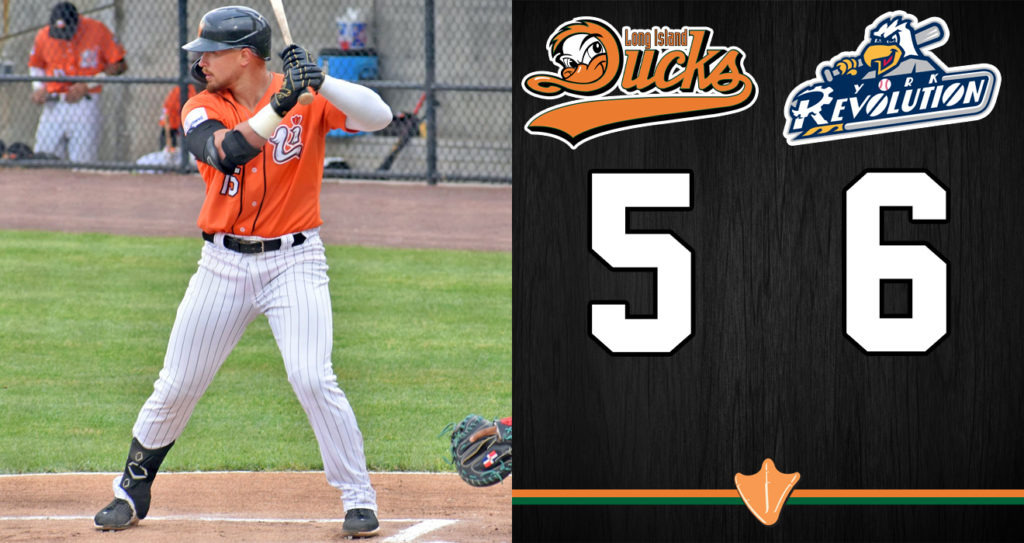 (Central Islip, N.Y., June 7, 2022) – The Long Island Ducks were defeated by the York Revolution 6-5 on Tuesday night in the opener of a three-game series at Fairfield Properties Ballpark.

Both teams traded zeroes until the top of the fifth inning when York plated three runs off Ducks starter Anderson DeLeon. RBI singles by Jack Kenley and Elmer Reyes along with an RBI double by Melky Mesa did the damage. The Ducks answered back with three runs of their own in the bottom of the frame off Revolution starter Jorge Martinez. Dustin Woodcock’s two-run double and Vladimir Frias’ RBI double tied the game at three.

The Revolution took the lead back in the seventh on a run-scoring error and a bases loaded walk by Josue Herrera. Long Island closed to within 5-4 in the bottom of the seventh on Rusney Castillo’s RBI single to center. A RBI single to center by Woodcock in the eighth tied the game at five. Carlos Franco put the Revolution back ahead for good in the ninth with a solo homer off the left field foul pole.

Neither starter factored into the decision. DeLeon tossed five innings of three-run ball, allowing five hits and a walk while striking out six. Martinez pitched five and one-third innings, yielding three runs on seven hits and one walk with seven strikeouts. Josh Martin (1-0) picked up the win despite allowing a run on a hit and a walk in one inning of relief. Nick Goody (0-1) took the loss, conceding the winning run on one hit with two strikeouts in one inning. Jim Fuller collected his eighth save of the season with a scoreless ninth.

Castillo led the Flock offensively with three hits and an RBI. Woodcock added two hits, three RBIs, a run and a walk.

The Ducks and Revolution continue their three-game series on Wednesday night. Game time is slated for 6:35 p.m., with the Fairfield Properties Ballpark gates opening at 5:35 (5:20 for full season ticket holders). It’s a Waddle In Wednesday at the ballpark! Fans will be able to purchase brand new Ducks Boonie Hats in the Waddle In Shop throughout the ballgame. Right-hander Akeel Morris (1-4, 6.81) takes the mound for the Ducks against Revolution righty Nick Travieso (1-2, 5.32).