DUCKS RETURN THE FAVOR BY SWEEPING THE HONEY HUNTERS 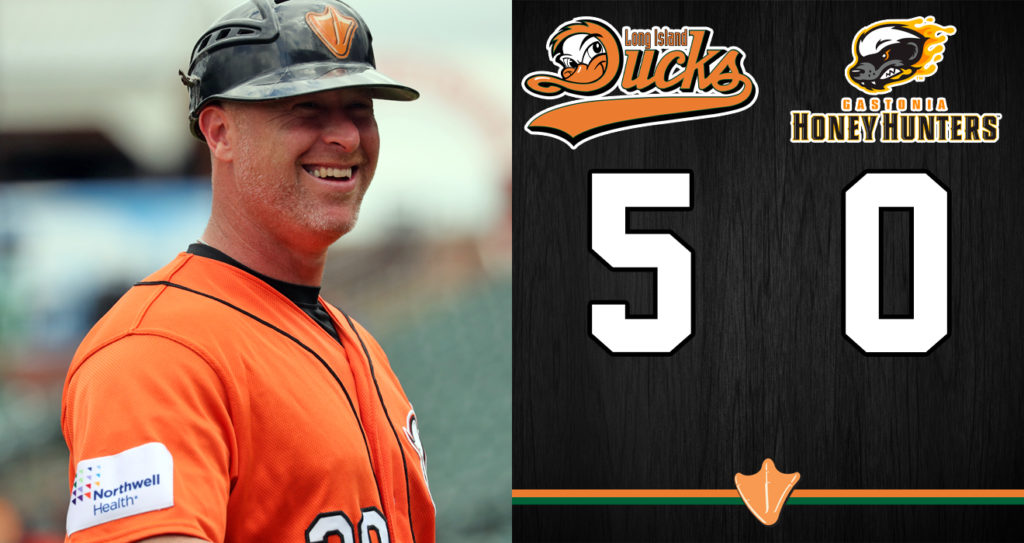 Long Island took a 2-0 advantage in the second inning on back-to-back two-out run-scoring singles produced by Austin Rei and Joe DeCarlo off Gastonia starter John Anderson. Rei was at it again in the fifth as the Ducks catcher plated L.J. Mazzilli with a double into the left field corner which made it 3-0 in favor of the visitors after Mazzilli tallied a two-base hit of his own earlier in the frame.

The Flock closed out the scoring in the sixth with a pair of runs to give the game its final of 5-0 thanks to a sacrifice fly off the bat of Johnni Turbo that plated Dustin Woodcock and an RBI ground-rule double from Alejandro De Aza that enabled Deven Marrero to cross the plate as De Aza finished the series with eight runs batted in. Akeel Morris (1-4) won his first game of the season as the right-hander fired six scoreless innings on just five hits allowed, striking out six in the process. Anderson (3-4) was tagged with the loss, surrendering five runs on 12 hits across five and one-third innings on the mound, walking three and striking out five.

Mazzilli led the way with three hits in the ballgame, with De Aza, Rei, Woodcock, and DeCarlo tallying a pair of hits apiece as Long Island won their fourth consecutive game on the road en route to the sweep.

Long Island returns home on Friday, June 3, to begin a three-game series with the Staten Island FerryHawks. Game time is slated for 6:35 p.m., with the Fairfield Properties Ballpark gates opening at 5:35 (5:20 for full season ticket holders). It’s an Angela’s Pizza Friday! A player on the FerryHawks will be designated as the K-Man, and if he strikes out during the game, all fans can show their game ticket to receive six zeppoles with the purchase of a pie throughout the rest of the weekend at Angela’s Pizzeria of Islip. Right-Hander Joe Iorio (4-0, 2.81) gets the start for the Ducks against FerryHawks righty Matt Solter (0-3, 1.93).