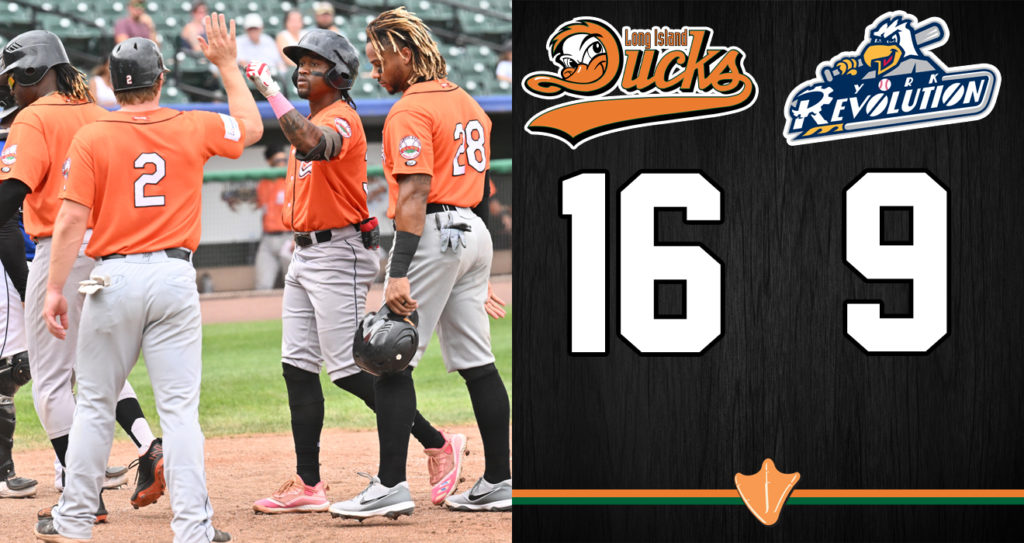 (York, Pa., Aug. 21, 2022) – The Long Island Ducks defeated the York Revolution 16-9 on Sunday afternoon in the final game of a three-game series at PeoplesBank Park.

The Ducks opened the scoring in the second inning on Joe DeCarlo’s RBI single to center field off Revolution starter Austin Nicely. York took a 3-1 lead against Ducks starter Scott Harkin in the bottom of the inning on RBI singles by Connor Lien and Josue Herrera and a sac fly off the bat of Lenin Rodriguez.

However, Long Island responded with a seven-run third inning to go back in front 8-3. Deibinson Romero’s three-run home run and Anfernee Seymour’s grand slam, both over the Arch Nemesis in left, did the damage. Melky Mesa’s RBI double to left-center in the bottom of the third closed the gap to 8-4.

It stayed that way until the sixth when an eight-run inning gave the Ducks a 16-4 lead. RBI singles by Phil Caulfield, Romero and DeCarlo, along with a grand slam by Vladimir Frias, highlighted the inning. The Revs closed to within 16-9 in the bottom of the sixth, highlighted by Herrera’s grand slam, but they could get no closer.

The Ducks continue their road trip on Tuesday night when they open a three-game series against the Lancaster Barnstormers. First pitch is scheduled for 6:30 p.m. at Clipper Magazine Stadium. Fans can follow all the action on the Long Island Ducks Broadcast Network. Live streaming HD video and audio will be available via BoxCast on LIDucks.com as well as on the Ducks official Facebook page and YouTube channel. Right-hander Ryan Meisinger (3-2, 6.25) gets the start for the Ducks against Barnstormers righty Nile Ball (7-4, 4.25).