DUCKS SCORE EARLY AND OFTEN IN ROUT OF REVOLUTION 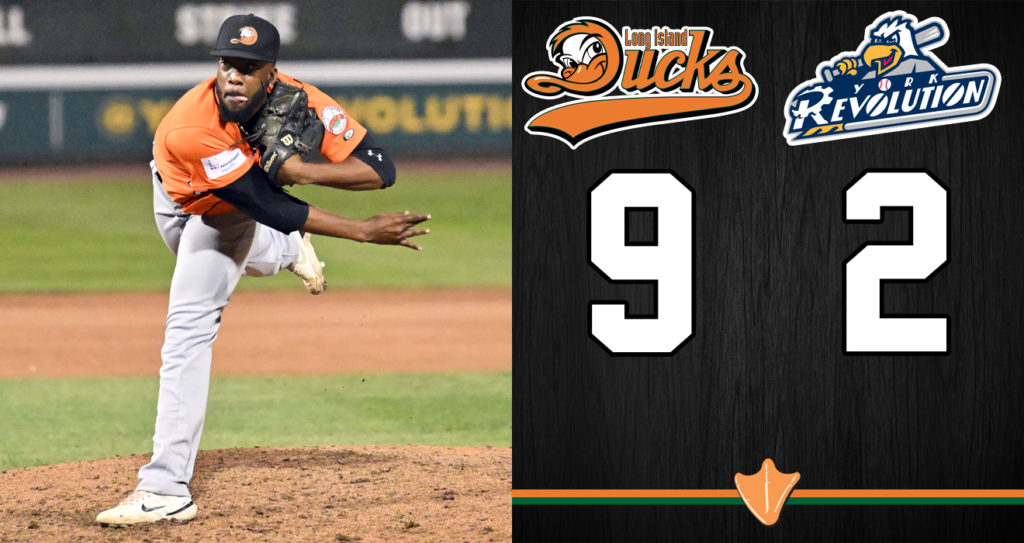 (York, Pa., Aug. 19, 2022) – The Long Island Ducks defeated the York Revolution 9-2 on Friday night in the opener of a three-game series at PeoplesBank Park.

Long Island jumped in front 2-0 in the first inning on back-to-back RBI singles by Deibinson Romero and Carlos Castro off Revolution starter Ben Herrick. Phil Caulfield’s RBI fielder’s choice in the second and Joe DeCarlo’s solo home run over the Arch Nemesis in the fourth doubled the Ducks lead to four.

Deibinson Romero’s second RBI single of the night pushed the Ducks lead up to 5-0 in the fifth. Lew Ford then drove a two-run home run over the right field fence in the sixth to make it a 7-0 ballgame.

York cracked the scoreboard in the bottom of the sixth on Telvin Nash’s RBI single to right field off Duck starter Akeel Morris. Connor Lien’s solo homer to left in the seventh closed the gap to 7-2. However, an RBI double down the left field line by Romero and a wild pitch that scored Alejandro De Aza restored the Ducks seven-run lead at 9-2.

The Ducks and Revolution continue their three-game set on Saturday night. First pitch is scheduled for 6:30 p.m. at PeoplesBank Park. Fans can follow all the action on the Long Island Ducks Broadcast Network. Live streaming HD video and audio will be available via BoxCast on LIDucks.com as well as on the Ducks official Facebook page and YouTube channel. Right-hander Joe Iorio (7-4, 5.09) takes the mound for the Ducks against Revolution righty Nick Travieso (6-5, 4.03).