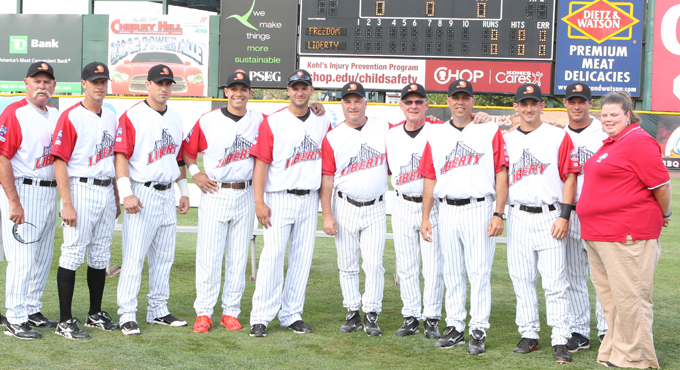 Manager Kevin Baez was the skipper for the Liberty Division All-Stars, and joining him were fellow coaches Bud Harrelson, Jay Loviglio and Steve Foucault along with trainer Dorothy Pitchford. Baez tabbed Ray Navarrete to start at second base and bat second, while Dan Lyons was the starting shortstop and batted ninth.

After the Freedom Division took a 1-0 lead, Navarrete clubbed a first inning two-run home run to left off former Duck John Halama to give the Liberty Division a 2-1 lead. The seven-year Duck would finish 1-for-3 at the plate with two RBI and a run. Lyons had two at-bats in the game, finishing 0-for-2.

Baez went to his bench in the sixth inning, calling on Kraig Binick to replace former Duck Kennard Jones in center field and Shawn Williams to take Navarrete’s spot at second. Binick went 1-for-2 at the plate with a RBI double in the ninth inning, while Williams was 0-for-2 in his two plate appearances.

On the mound, right-handers Jason Monti and Jeremy Hill each threw one inning of relief for the Liberty Division. Monti pitched the fourth inning, collecting one strikeout and preserving the lead for the host division, and Hill fired a 1-2-3 seventh inning, recording a strikeout and two groundouts.