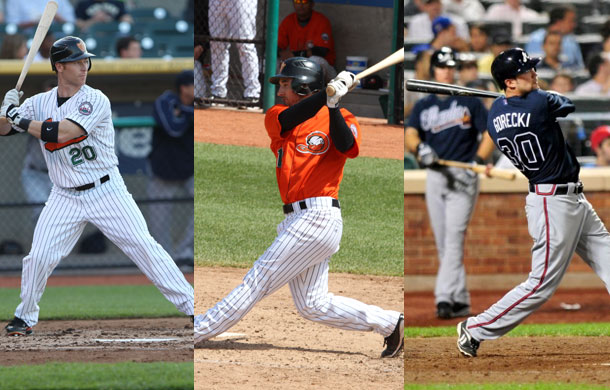 
(Central Islip, N.Y., Feb. 22, 2012)
– The Long Island Ducks today announced the signings of outfielders Lew Ford and Reid Gorecki along with infielder Dan Lyons, bringing their roster total to seven players. Ford returns for his third season with the Ducks while Lyons comes back for a second year on Long Island. Gorecki will make his Atlantic League debut.

“We are excited to bring back Lew and Dan while adding Reid to our club,” says Ducks president/general manager Michael Pfaff. “Lew and Dan were big contributors for us last year, and Reid will add Major League experience to our lineup.”

Ford spent the entire 2011 season with the Ducks, compiling a .318 batting average, 10 home runs and 45 RBI in 72 games. Following the season, he was named a second team Atlantic League All-Star. The outfielder also spent the 2009 campaign on Long Island, finishing second in the league in batting with a .330 average while clubbing 10 homers and 55 RBI.

Lyons returns to the Flock after having a strong all-around season in 2011. Offensively, he hit .283 with 40 RBI, 44 runs, and 12 stolen bases, while in the field, he compiled a .971 fielding percentage and showed tremendous range at shortstop.

Drafted by the Washington Nationals in the 14th round of the 2007 Major League Draft, the 27-year old spent the majority of the 2010 season with Potomac of the Carolina League compiling a fielding percentage of over .960. Prior to starting his professional career, Lyons spent two seasons playing shortstop for the University of Minnesota and was only the fourth Minnesota shortstop to field .950 or higher since 1970.

Gorecki joins the Ducks with nine years of professional baseball experience. He reached the Major Leagues during the 2009 season with the Atlanta Braves, collecting three RBI and six runs in 31 games. The Queens native picked up his first Major League hit and RBI on August 19 in a 15-2 win over the New York Mets at Citi Field.

The 31-year-old last played in 2010 as a member of the New York Yankees organization, splitting time with Double-A Trenton and Triple-A Scranton/Wilkes-Barre. He combined to hit .254 with five home runs, 45 RBI, 25 doubles, and 20 stolen bases in 107 games. In his pro debut with the Single-A New Jersey Cardinals, the outfielder led the New York-Penn League in triples (13) and runs (55), earning league All-Star honors. Gorecki was drafted by the St. Louis Cardinals in the 13th round of the 2002 amateur draft.