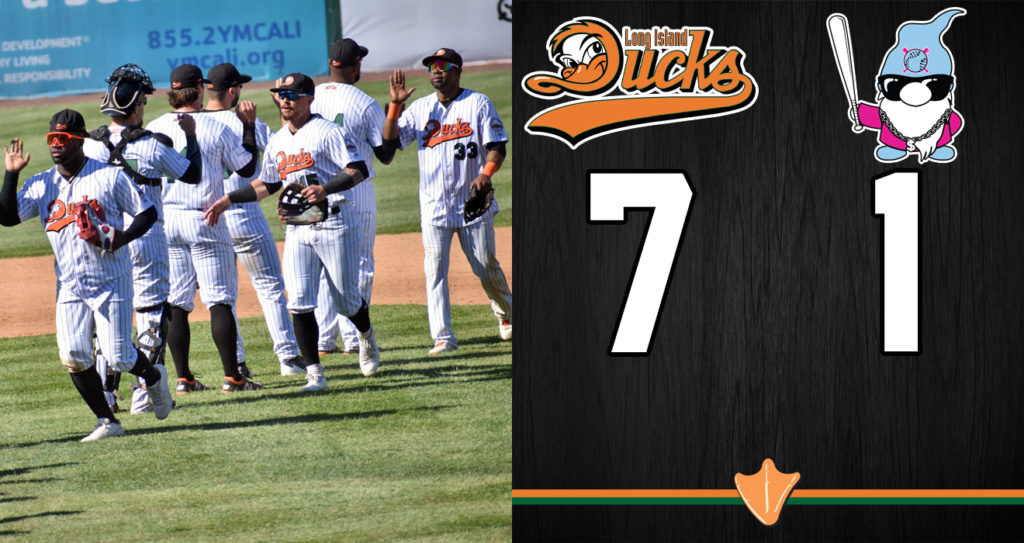 The Ducks struck first, putting up a four-spot in the first inning for the second consecutive game. Bases loaded walks by Deibinson Romero, Rusney Castillo and Dustin Woodcock, plus an RBI single by Joe DeCarlo, gave the Ducks a 4-0 lead.

Castillo singled and later scored on an error in the third, extending Long Island’s lead to five. Sam Travis’ RBI single and Romero’s sac fly to right in the fourth made it a 7-0 ballgame. The Genomes broke up the series shutout bid in the ninth on a Chris Shaw leadoff solo homer to right.

Ducks starter Akeel Morris (3-4) was terrific on the mound, tossing six and two-thirds scoreless innings. He allowed five hits and two walks while striking out six batters. Aaron Blair (0-4) suffered the loss, surrendering four runs on six walks in one-third of an inning.

The Ducks continue their homestand on Tuesday night when they open a three-game set against the High Point Rockers. Game time is slated for 6:35 p.m., with the Fairfield Properties Ballpark gates opening at 5:35 (5:20 for full season ticket holders). It’s Alzheimer’s Awareness Night at the ballpark, presented by Good Samaritan Hospital. The first 1,000 fans in attendance will receive Ducks Cowbells. Good Samaritan Hospital will also be providing screenings for blood pressure and body mass index at the ballpark. It’s a Triple Play Tuesday as well! If the Ducks turn a triple play during the game, one lucky fan will win $25,000. Simply sign up prior to first pitch at the Ticket Kiosk on the main concourse to be eligible. Right-hander Joe Iorio (5-1, 3.63) gets the start for the Ducks against a Rockers starter to be determined.