DUCKS TAKE SEE-SAW AFFAIR FROM REVS TO EVEN SERIES 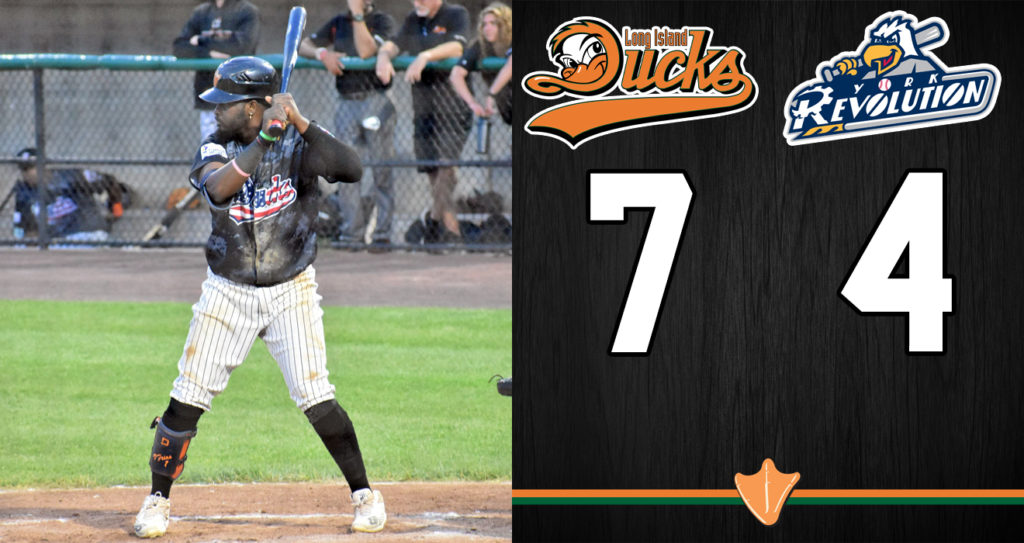 The Ducks jumped in front 3-1 in the fourth on Alejandro De Aza’s two-run home run to right. However, an RBI ground-rule double from Elmer Reyes and a two-run homer to right by Nellie Rodriguez in the fifth put the Revs back on top 4-3.

Long Island took the lead back in the sixth on a wild pitch that scored Vladimir Frias and a sac fly to left off the bat of Deibinson Romero. Another two-spot in the seventh on Rei’s RBI double to left and Frias’ RBI single to right extended the advantage to 7-4.

Iorio did not factor into the decision but lasted five innings, allowing four runs on six hits and three walks while striking out four. Chad Hockin (2-1) picked up the win after tossing a scoreless inning in the sixth. Sanabia (3-2) took the loss, conceding seven runs on eight hits and a walk over six and one-third innings with four strikeouts. Nick Goody collected his fifth save after striking out the final two batters and leaving the tying runs on base.

The Ducks and Revolution wrap up their three-game set on Sunday night. Game time is slated for 6:35 p.m., with the ballpark gates opening at 5:35 (12:20 for full season ticket holders). Following the game, all fans in attendance will be treated to a Fireworks Spectacular, presented by Catholic Health. It’s also Skin Cancer Awareness Night, presented by Good Samaritan Hospital, and the first 1,000 fans in attendance will receive Ducks Beach Balls. Good Samaritan Hospital will also be providing screenings for blood pressure and body mass index. Left-hander Stephen Tarpley (3-3, 2.76) toes the rubber against Revolution righty Nick Travieso (2-4, 5.02).