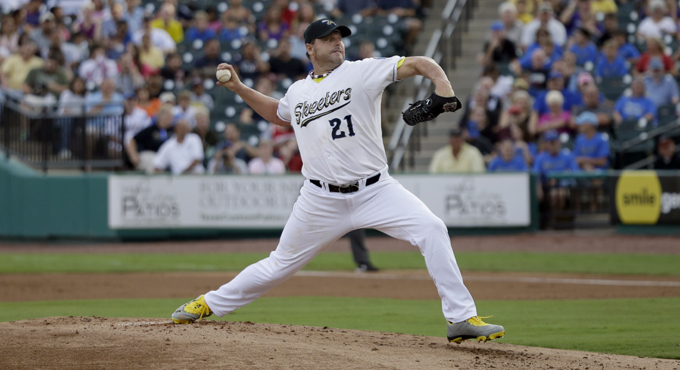 (Central Islip, N.Y., Aug. 30, 2012) – The Sugar Land Skeeters today announced that former Major Leaguer Roger Clemens will pitch for the Skeeters against the Ducks in Sugar Land, Texas on Friday, September 7. It will be his second start in the Atlantic League after pitching against the Bridgeport Bluefish on August 25.

“To face a pitcher of his caliber will be a tremendous experience for our club,” says Ducks manager Kevin Baez. “Roger had a great Major League career, and we’re excited for the opportunity to play against him.”

Clemens is one of just three Major Leaguers all-time with at least 300 wins, 4,000 strikeouts and 40 shutouts. The seven-time Cy Young Award winner has compiled a career record of 354-184 with a 3.12 ERA in over 700 starts. He has struck out 4,672 batters while collecting 118 complete games and 46 shutouts in his 24-year career. The 11-time All-Star also has a 12-8 postseason mark with a 3.75 ERA, winning World Series titles in 1999 and 2000 with the New York Yankees and reaching the Fall Classic on four other occasions.

The 50-year-old right-hander pitched three and one-third scoreless innings against the Bridgeport Bluefish at Constellation Field on August 25. He allowed just one hit, a single to James Simmons, while striking out two. It was his first professional game since October 7, 2007 as a member of the Yankees. Left-hander Randy Keisler is expected re-join the Ducks on September 7 in Sugar Land and be activated to start against Clemens that night. Tickets for the game in Sugar Land are available by visiting the Constellation Field ticket office, calling 281-240-4487 or visiting www.sugarlandskeeters.com.

ESPN will present exclusive, live coverage of Roger Clemens’ second start with the Sugar Land Skeeters of the Atlantic League as they host the Long Island Ducks Friday, Sept. 7, at 8:05 p.m. ET. ESPN3 will exclusively deliver the game in its entirety. In addition, SportsCenter on ESPNEWS will cut-in live to every inning Clemens pitches. Kevin Dunn will provide commentary with guest analyst Danny Graves and reporter Bob Holtzman.

ESPN, ESPN2, ESPNEWS and Longhorn Network will also show live shots throughout the day from Constellation Field – home of the Skeeters – where Clemens will be preparing for his start.