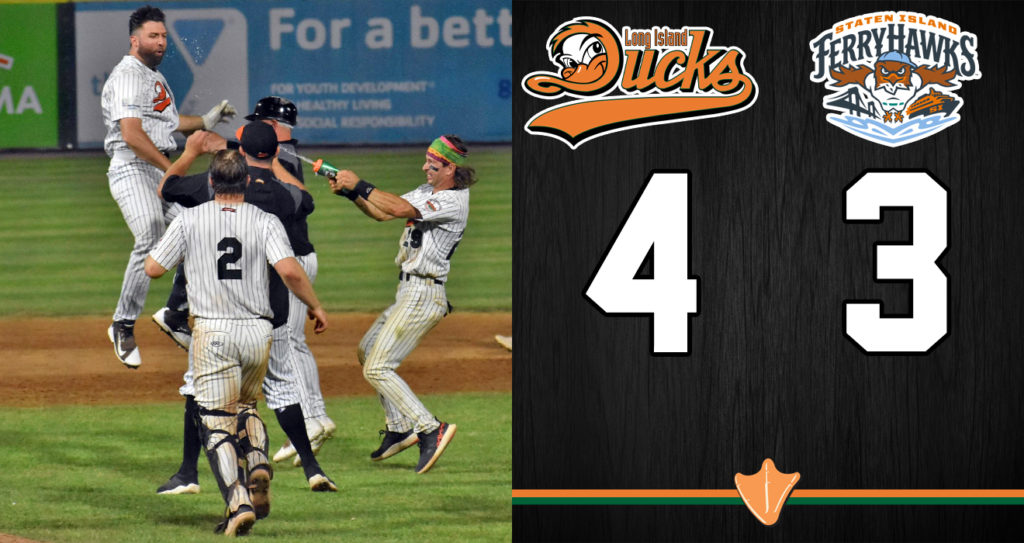 (Central Islip, N.Y., July 28, 2022) – The Long Island Ducks defeated the Staten Island FerryHawks 4-3 in 11 innings on Thursday night in the rubber game of a three-game series at Fairfield Properties Ballpark.

The Ducks took a 2-0 lead in the second inning on a wild pitch by FerryHawks starter Dakota Freese that scored Jacson McGowan and an RBI single to left field by Kevin Whatley. The FerryHawks closed to within 2-1 in the third on Mariel Bautista’s sac fly to center off Ducks starter Bennett Parry. It stayed that way until the sixth when Staten Island tied the game at two on Alfredo Reyes’ RBI fielder’s choice.

Rusney Castillo broke the deadlock in the seventh with an RBI single through the left side, putting the FerryHawks ahead 3-2. Long Island tied the game at three in the bottom of the eighth on a bases loaded walk by L.J. Mazzilli. It remained even until the bottom of the 11th when Sam Travis won the game with a walk-off RBI single to right.

Neither starter factored into the decision. Parry tossed five innings of one-run ball, allowing three hits and four walks while striking out six. Freese lasted five and two-thirds innings, yielding two runs on seven hits and three walks with four strikeouts. Chris Cepeda (3-0) earned the win with a scoreless 11th inning, striking out one. Vin Aiello (0-2) took the loss, conceding the winning run on a hit and a walk in one-third of an inning.

The Ducks hit the road on Friday night to open a three-game series against the Wild Health Genomes. First pitch is scheduled for 6:35 p.m. at Wild Health Field. Fans can follow all the action on the Long Island Ducks Broadcast Network. Live streaming HD video and audio will be available via BoxCast on LIDucks.com as well as on the Ducks official Facebook page and YouTube channel. Right-hander Ryan Meisinger (2-1, 3.86) gets the start for the Ducks against Genomes righty Elih Villanueva (6-8, 5.82).