DUCKS WADDLE OFF PAST REVOLUTION ON DE AZA’S DOUBLE 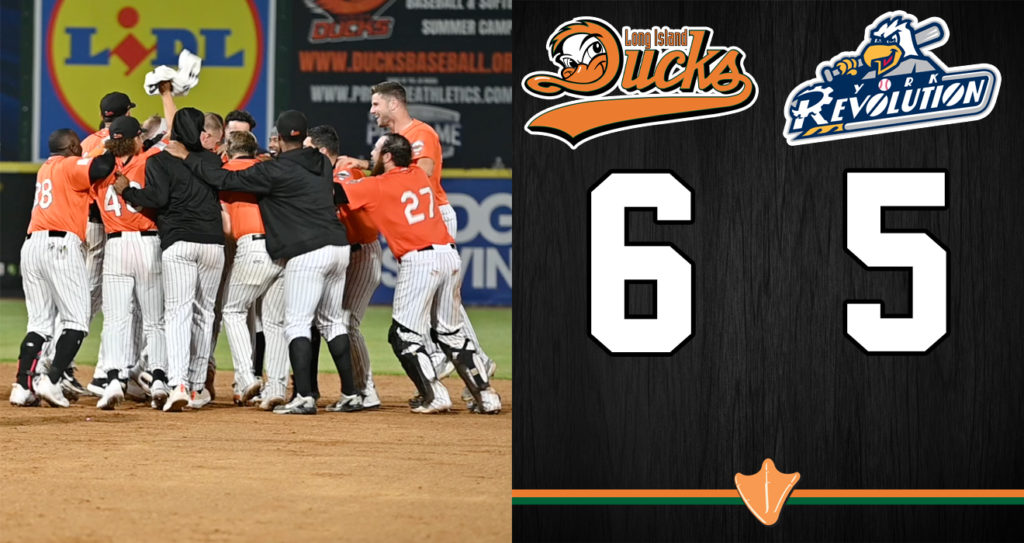 (Central Islip, N.Y., June 8, 2022) – The Long Island Ducks defeated the York Revolution 6-5 in walk-off fashion on Wednesday night in the middle game of a three-game series at Fairfield Properties Ballpark.

The Ducks exploded for four runs in the first inning on Sam Travis’ two-run double to right field and Rusney Castillo’s two-run home run to left field off Revolution starter Nick Travieso. Carlos Franco put the Revolution on the scoreboard in the second with a solo homer to right off Ducks starter Akeel Morris, but a run-scoring groundout by Vladimir Frias in the bottom of the frame restore Long Island’s four-run lead at 5-1.

It stayed that way until the top of the eighth when York plated four runs of their own to tie the game at five. Franco’s RBI single, a run-scoring error, Jack Kenley’s RIB double and a sac fly to center off the bat of Jhon Nunez did the damage. The Ducks responded in the bottom of the ninth to win the game on Alejandro De Aza’s two-out RBI double to right-center, which scored Frias.

Neither starter factored into the decision. Morris tossed six innings of one-run ball, allowing six hits and two walks while striking out three. Travieso lasted just two innings, giving up five runs on three hits and three walks with one strikeout. Tyler Webb (1-2) picked up the win after recording the final out of the ninth inning. Robinson Parra (2-1) suffered the loss, surrendering the winning run on two hits in the ninth.

Travis led the Flock offensively with two hits, two RBIs and a run scored. De Aza also added two hits as well as an RBI and a run.

The Ducks and Revolution wrap up their three-game series on Thursday night. Game time is slated for 6:35 p.m., with the Fairfield Properties Ballpark gates opening at 5:35 (5:20 for full season ticket holders). It’s a Thirsty Thursday at the ballpark! Fans will be able to enjoy a special buy one, get one half-price offer on EBBS craft beer and Fountain hard seltzer in the ballpark throughout the game. In addition, the Duck Club restaurant/bar on the suite level will be open for all fans to enjoy. Right-hander Joe Iorio (5-0, 2.76) toes the rubber for the Ducks against Revolution lefty Austin Nicely (1-5, 7.54).