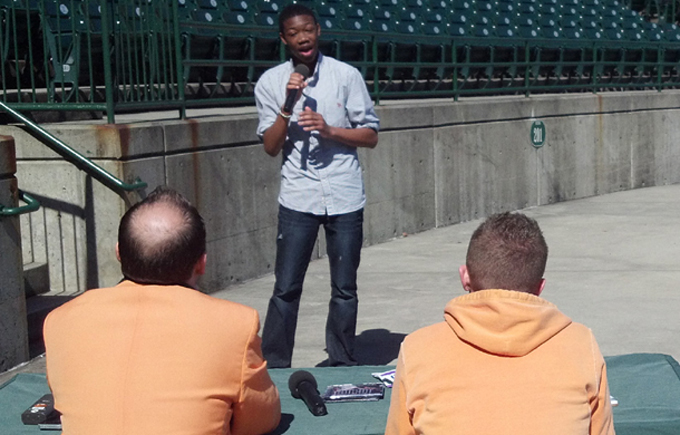 Six contestants selected to perform in 2012


(Central Islip, N.Y., Apr. 14, 2012)
– The Long Island Ducks, in conjunction with 106.1 WBLI, held their annual “Anthem Idol Contest” on Saturday, April 7, at Bethpage Ballpark.  Registrants competed for six openings to perform the national anthem before a Ducks game during the 2012 season. Each contestant performed a 90-second rendition of the national anthem before the judges and fellow contestants. Judging the contest were Ducks on-field host Paul DeGrocco and WBLI on-air personality Syke.

“Our contestants had a great range of talent, and I was impressed with each and every one of them,” says Ducks Promotions Coordinator Jordan Schiff. “We are all looking forward seeing the winners showcase their talents at Bethpage Ballpark this year.”

Eluminum from Bay Shore, Tara Fevang from North Babylon, Kordell Hammond from Bay Shore, Rachel Hankers from Centereach, Lauren Parfidio from the Bronx and Kristi Rhodes from Medford were selected as the lucky six who will perform the “Star Spangled Banner” at Bethpage Ballpark this summer. The Long Island Ducks would like to thank everyone who auditioned for their wonderful performances and for helping make the 2012 Anthem Idol Contest another big hit.

Individual game tickets for the Ducks 2012 season are on sale now. The home opener takes place on Friday, May 4, as the Ducks take on the Camden Riversharks. For tickets, stop by the Bethpage Ballpark Box Office, call (631) 940-TIXX, or CLICK HERE. Season tickets, 10-Game Mini Plans and group outings are also currently available by calling (631) 940-3825.