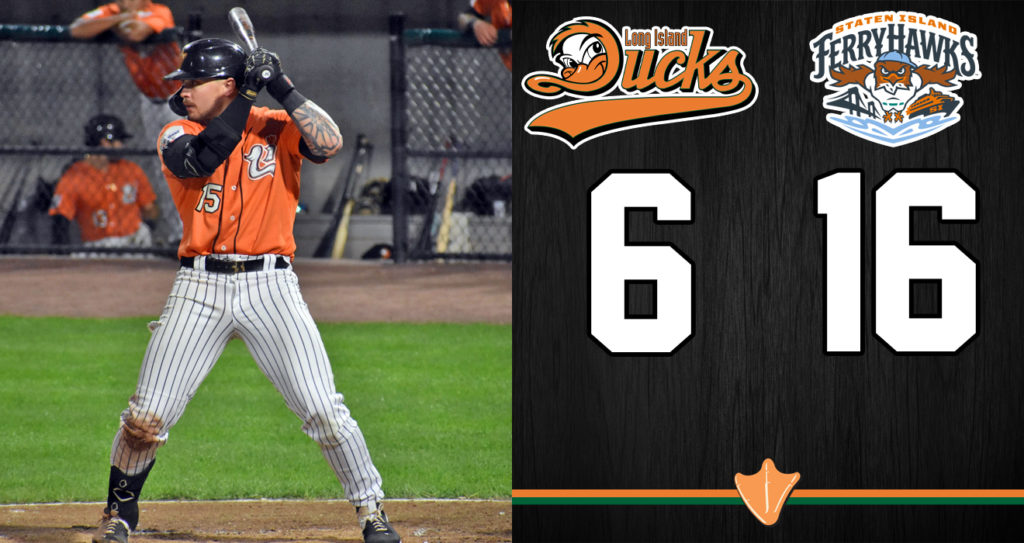 (Central Islip, N.Y., Sept. 10, 2022) – The Long Island Ducks were defeated by the Staten Island FerryHawks 16-6 on Saturday night in the middle game of a three-game series before a past-capacity crowd of 7,054 at Fairfield Properties Ballpark.

Four of Long Island’s six runs in the ballgame came via the longball. Phil Caulfield led off the bottom of the first inning with a solo home run to right field. Dustin Woodcock launched a two-run homer to right in the fourth, while Jose Sermo added a massive solo homer to right in the fifth. Woodcock finished the night with two hits, two RBIs, two runs and a walk, while Deibinson Romero drove in a run with a groundout.

Staten Island’s offense was led by a two-run third inning, an eight-run fourth and a four-run sixth. Mariel Bautista led the way with four hits, including a pair of home runs, driving in four runs and scoring four times. Angel Aguilar also went deep in the game with a two-run homer to left, scoring two runs and walking twice in the game. Ricardo Cespedes got into the action as well with three hits, three RBIs and two runs.

Dylan Castaneda (2-0) picked up the win for the FerryHawks, tossing six innings, allowing six runs (five earned) on five hits and five walks while striking out seven. James Varela (1-2) suffered the loss for the Ducks, surrendering nine runs on nine hits and a walk over three and one-third innings with two strikeouts.

The Ducks and FerryHawks wrap up their three-game set on Sunday afternoon. Game time is slated for 1:35 p.m., with the Fairfield Properties Ballpark gates opening at 12:35 (12:20 for full season ticket holders). The first 1,000 fans in attendance will receive Ducks Koozies, courtesy of Hagerty Insurance. There will also be a pregame Classic Car Show on the plaza of Fairfield Properties Ballpark and Court House Drive for fans to enjoy. It’s a Sunday Family Funday as well, presented by Bethpage Federal Credit Union, featuring a pregame Catch on the Field from 12:40 to 1:00 and postgame Kids Run the Bases. Right-hander Akeel Morris (6-9, 5.51) toes the rubber for the Ducks against a FerryHawks starter to be determined.