DUCKS WORK OUT ON EVE OF OPENING NIGHT 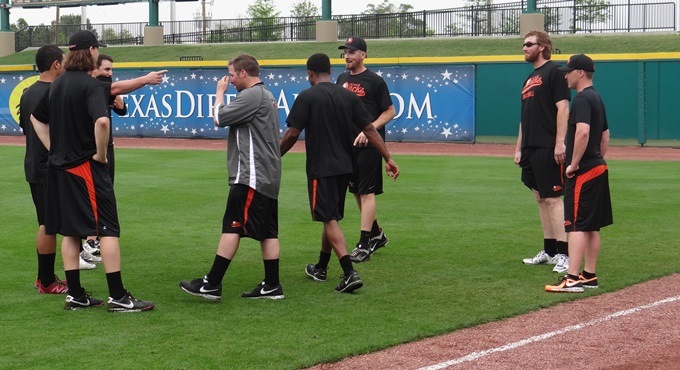 (Sugar Land, Texas, April 17, 2013) – Despite overcast skies and humid conditions, the defending Atlantic League champion Long Island Ducks held a final team workout at Constellation Field on Wednesday afternoon in preparation for Opening Night. Pitchers and hitters both got their work in following Tuesday’s night’s exhibition game between the two teams, which ended in a scoreless tie after 10 innings.

The 2013 regular season kicks off on Thursday night as the Ducks battle the Sugar Land Skeeters in the first game of a four-game series. Game time is slated for 8:05 p.m. EDT from Constellation Field. Fans can follow all the action from Thursday’s game via live streaming audio on the Ducks’ official YouTube channel, www.youtube.com/ducksbaseball, with Michael Polak calling the play-by-play. The North Shore LIJ/Southside Hospital Pre-Game Show will begin 15 minutes prior to first pitch.

Manager Kevin Baez has announced his starting line-up for Thursday night’s game. The starting nine will be as follows:

In addition, both teams have also announced their probable starting pitchers for the first series of the season. The pitching match-ups will be as follows:

Following the four-game series in Sugar Land and a three-game set in Lancaster against the Barnstormers, the Ducks will return home on Friday, April 26 for the 2013 Home Opener against the Skeeters. First pitch is set for 7:05 p.m., with the Bethpage Ballpark gates opening at 6:05. The first 1,500 fans in attendance will receive Replica Championship Rings, courtesy of P.C. Richard and Son. Prior to the game, the Ducks will also host a Championship Ring and Banner Raising Ceremony to celebrate the team’s 2012 Atlantic League championship. Fans are asked to be in their seats by 6:30 to enjoy this special moment in Ducks history.

Tickets for the game and all 70 Ducks regular season home games are now on sale. Fans can purchase their tickets by visiting the Bethpage Ballpark box office, calling 631-940-TIXX or by CLICKING HERE.