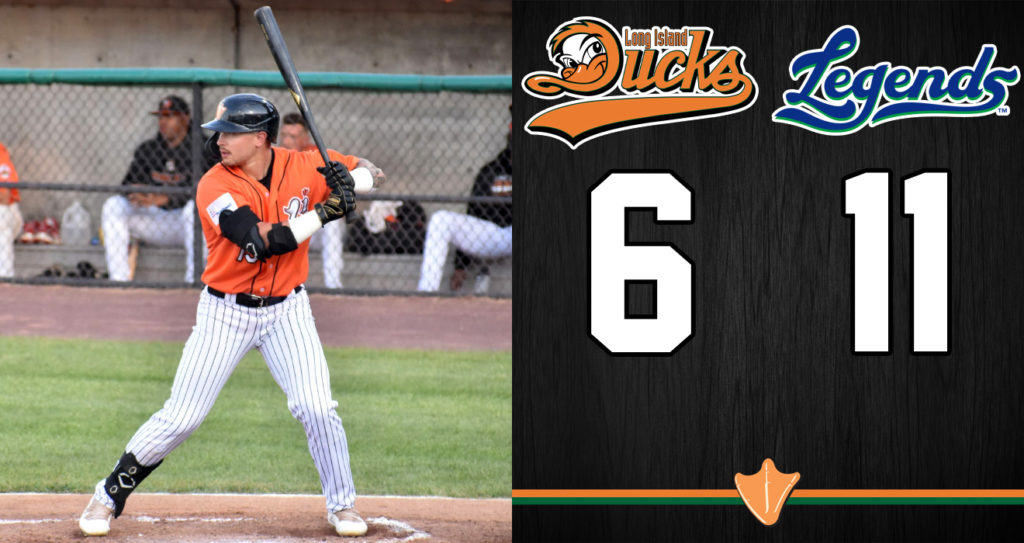 (Central Islip, N.Y., July 13, 2022) – The Long Island Ducks were defeated by the Lexington Legends 11-6 on Wednesday night in the middle game of a three-game series at Fairfield Properties Ballpark.

Despite the loss, history was made by Ducks outfielder Dustin Woodcock. The first-year Duck launched three home runs in the game, making him just the second player in franchise history to accomplish that feat. He joins Ducks all-time great Ray Navarrete, who hit three homers on June 8, 2008, against the Newark Bears. Woodcock finished the night with four RBIs and three runs scored.

Long Island set a season-high with five home runs as a team in the contest. In addition to Woodcock’s three blasts, Lew Ford hit a solo home run to left-center field in the bottom of the first as part of a three-hit night. L.J. Mazzilli also went deep with a solo homer to left-center in the eighth and finished the game with three hits and a walk.

Lexington countered with six home runs on their way to the win. Tillman Pugh and Rusber Estrada both hit two solo home runs to left field. Isaias Tejeda’s two-run homer to left in the first inning got the scoring started, and Courtney Hawkins added a two-run homer of his own to left in the fifth. 14 of the 17 runs scored between the two teams came on home runs.

The Ducks and Legends wrap up their three-game set on Thursday morning. Game time is slated for 11:05 a.m., with the Fairfield Properties Ballpark gates opening at 10:05 (9:50 for full season ticket holders). It’s Camp Day at the ballpark, so come down and cheer on the Flock during the midweek matinee. Left-hander Bennett Parry (0-1, 8.00) toes the rubber for the Ducks against Legends righty Wes Albert (0-1, 2.77).