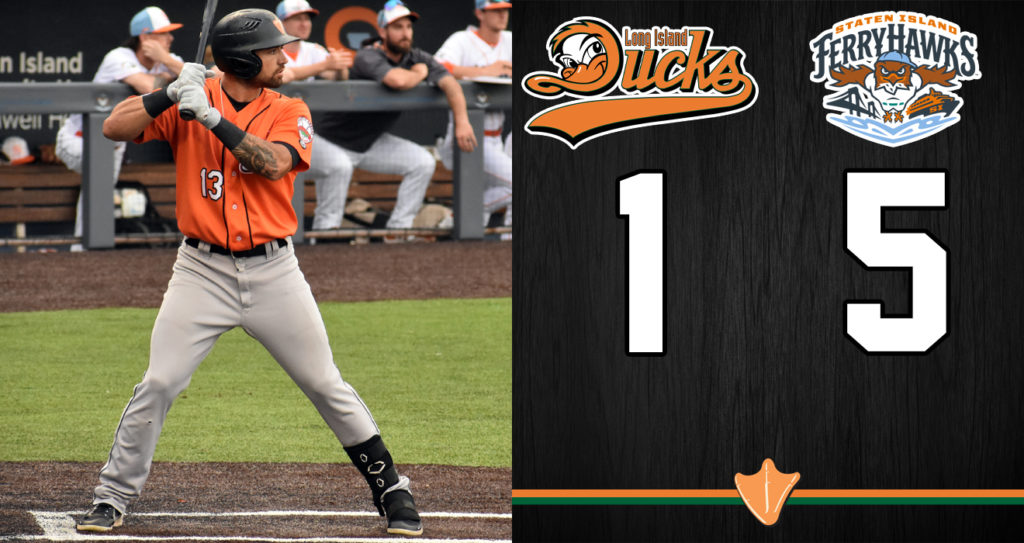 (Staten Island, N.Y., June 29, 2022) – The Long Island Ducks were defeated by the Staten Island FerryHawks 5-1 on Wednesday evening in the second of a three-game midweek series from Staten Island University Hospital Community Park.

Staten Island took a 1-0 lead versus Ducks starter Scott Harkin in the second inning courtesy of a one-out RBI double off the bat of Joseph Reyes that plated Mariel Bautista who also had a two-base hit earlier in the frame. The FerryHawks made it 2-0 in their favor in the fourth with Reyes doing the damage once again, plating Angel Aguilar with his second run-scoring double in as many at-bats. Staten Island jumped out to a 4-0 advantage in the fifth on RBI single from Antoine Duplantis and a sacrifice fly by Aguilar.

The Ducks cut the deficit to 4-1 in the sixth against Staten Island starter Anthony Rodriguez by way of a leadoff home run to left field produced by L.J. Mazzilli, his third roundtripper of the season. The Flock would threaten in each of the final three innings but would have nothing to show of it as the FerryHawks evened up the series at a victory apiece.

Harkin (4-6) was tagged with the loss, allowing five runs on seven hits across five innings pitched, walking two while not registering a strikeout. Rodriguez (2-4) picked up the win, allowing one run on three hits (one home run) in six innings of work, walking one and striking out four. Mazzilli and Joe DeCarlo led the way offensively for Long Island with two hits each.

The Ducks conclude their three-game series against the Staten Island FerryHawks on Thursday night. First pitch is scheduled for 6:30 p.m. at Staten Island University Hospital Community Park. Fans can follow all the action on the Long Island Ducks Broadcast Network. Live streaming HD video and audio will be available via BoxCast on LIDucks.com as well as on the Ducks official Facebook page and YouTube channel. Right-hander Akeel Morris (3-4, 5.86) gets the start for the Ducks against FerryHawks righty Nick Carrell (0-2, 6.91)