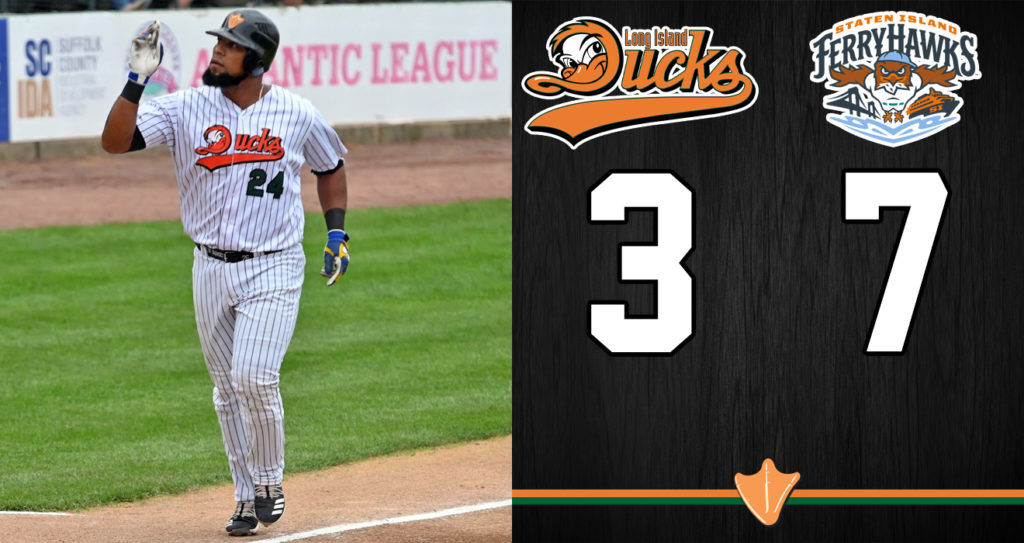 (Central Islip, N.Y., Sept. 11, 2022) – The Long Island Ducks were defeated by the Staten Island FerryHawks 7-3 on Sunday afternoon in the final game of a three-game series at Fairfield Properties Ballpark.

Staten Island took a 1-0 lead in the first inning on Angel Aguilar’s RBI single to right field off Ducks starter Akeel Morris. Long Island pulled even in the second on a leadoff solo homer to left-center by Deibinson Romero off FerryHawks starter Christian Capuano. Ricardo Cespedes put the FerryHawks back in front with a two-run single to right-center in the third. Andres Noriega added a solo homer to left in the fourth, and Cristopher Cespedes added an RBI groundout in the fifth, giving the visitors a 5-1 advantage.

The Ducks closed to within three in the bottom of the fifth on L.J. Mazzilli’s RBI single up the middle. However, a wild pitch that plated Bryan Gonzalez and an RBI single by Aguilar in the sixth made it a 7-2 game. Dustin Woodcock trimmed Long Island’s deficit to four with a solo homer to center in the seventh.

Capuano (1-0) earned the win, tossing six innings of three-run ball, allowing eight hits and two walks while striking out nine. Morris (6-10) took the loss, giving up five runs on eight hits and a walk over five innings with seven strikeouts.

Vladimir Frias led the Flock offensively with two hits, a run scored and a walk.

The Ducks continue their homestand on Tuesday night when they open a three-game series against the Southern Maryland Blue Crabs. Game time is slated for 6:35 p.m., with the Fairfield Properties Ballpark gates opening at 5:35 (5:20 for full season ticket holders). The Ducks will be hosting a Winning Inning Contest, presented by The Anne V. Graziani Fund. Each inning of the game will be designated with a specific occurrence, and if that takes place during the corresponding inning, one lucky fan in the ballpark will win $10,000. It’s a Triple Play Tuesday as well. If the Ducks turn a triple play during the game, one lucky fan will win $25,000. Simply sign up for the Winning Inning Contest and Triple Play Tuesday prior to first pitch at the Ticket Kiosk on the main concourse to be eligible. Right-hander Joe Iorio (10-5, 4.85) gets the start for the Ducks against a Blue Crabs starter to be determined.