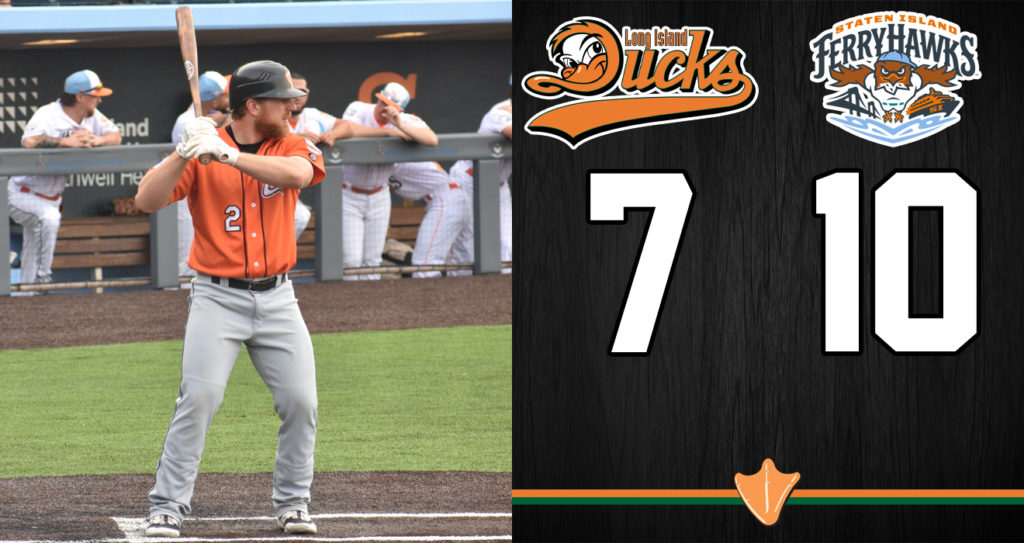 (Staten Island, N.Y., August 4, 2022) – The Long Island Ducks were defeated by the Staten Island FerryHawks 10-7 on Thursday night in the finale of a three-game midweek series from Staten Island University Hospital Community Park.

The FerryHawks jumped out in front 1-0 in the home half of the first versus Ducks starting pitcher Bennett Parry courtesy of a run-scoring single to center field off the bat of Angel Aguilar. Staten Island made it 3-0 in their favor in the second on a throwing error made by Parry off a sacrifice bunt by Andres Noriega and an RBI base knock from Alfredo Reyes. The home team went ahead 5-0 one inning later as Dilson Herrera cracked a two-run home run to left center field.

Trailing 7-0 in the fifth, the Ducks got on the board for the first time on the evening against FerryHawks starter Matt Solter courtesy of a bases loaded walk issued to Alejandro De Aza that scored Joe DeCarlo after he began the rally with a leadoff infield single, and a run-scoring groundout off the bat of Sam Travis that enabled Dustin Woodcock to cross the plate after he drew a free pass earlier in the frame. Jacson McGowan’s first home run in a Ducks uniform in the sixth got the Flock to within 7-3, and three batters later Phil Caulfield’s RBI double cut the deficit to 7-4.

Long Island got to within 7-6 in the seventh on an RBI groundout from Woodcock that scored McGowan and an opposite-field run-scoring single by Caulfield that plated DeCarlo. After a pair of Staten Island insurance runs put them up 9-6, Long Island dented the deficit to 9-7 in the eighth on a Carlos Castro groundout that enabled Travis to cross the plate. The comeback would fall just short as Victor Capellan closed the ballgame out for his team-best 13th save overall.

Solter (4-8) earned the win, giving up four runs on eight hits (one home run) in five and two-thirds innings pitched, walking four and striking out six. Parry (0-2) suffered the loss after allowing seven runs (five earned) on seven hits (one home run) across five innings pitched, walking three while striking out two. Caulfield led the way at the plate with the first five-hit performance of the season for Long Island, including two doubles, a triple, and a pair of runs batted in.

The Ducks continue their road trip on Friday night when they open up a three-game weekend series with the Southern Maryland Blue Crabs. First pitch is scheduled for 6:35 p.m. at Regency Furniture Stadium. Fans can follow all the action on the Long Island Ducks Broadcast Network. Live streaming HD video and audio will be available via BoxCast on LIDucks.com as well as on the Ducks official Facebook page and YouTube channel. Right-hander Ryan Meisinger (2-2, 5.93) gets the start for the Ducks against Blue Crabs righty Eddie Butler (9-2, 4.73)