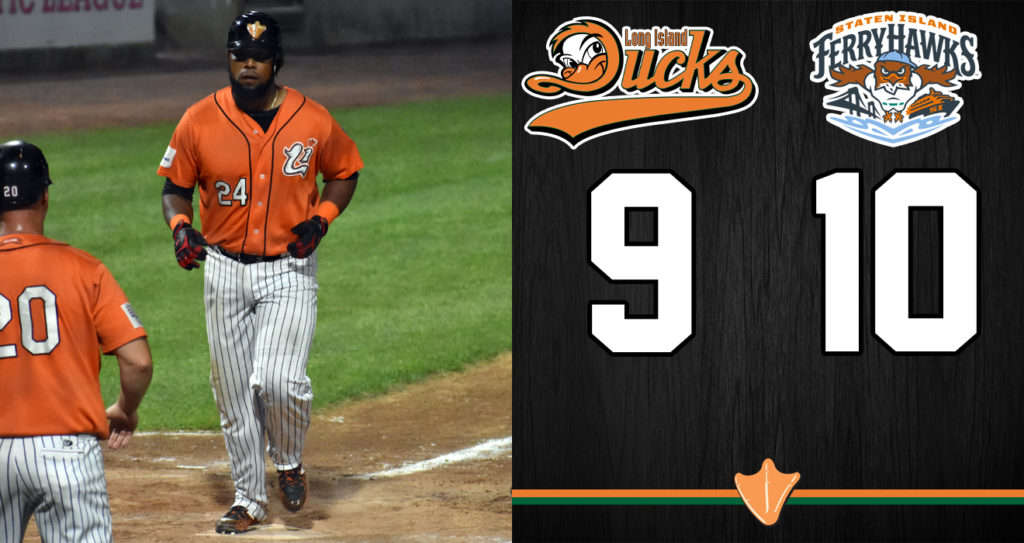 (Central Islip, N.Y., July 27, 2022) – The Long Island Ducks were defeated by the Staten Island FerryHawks 10-9 on Wednesday night in the middle game of a three-game series at Fairfield Properties Ballpark.

Staten Island took an early 1-0 lead in the first inning on Rusney Castillo’s RBI single to right field off Ducks starter Joe Iorio. Carlos Castro shot the Ducks in front 2-1 in the second with a two-out, two-run home run to left field off FerryHawks starter David Martinez. The FerryHawks answered in the third when Javier Betancourt doubled and later scored on an error, tying the game at two. However, a run-scoring groundout off the bat of Lew Ford in the bottom of the inning gave the Ducks the lead back.

A two-run fourth inning, highlighted by Betancourt’s RBI single to right and Dilson Herrera’s sac fly to right, gave Staten Island a 4-3 lead. Long Island tied it back up in bottom of the frame on Castro’s RBI single up the middle. The FerryHawks plated four more runs in the fifth inning to go in front 8-4 on RBI singles by Joseph Monge and Castillo along with a two-run base hit by Antoine Duplantis.

Alejandro De Aza closed the gap to 8-5 in the seventh on an RBI double down the right field line. Kevin Whatley lifted a two-run double into the right field corner in the eighth, trimming the deficit to one. However, Staten Island got both runs back in the ninth on Monge’s sac fly and Duplantis’ RBI single. Deibinson Romero launched a two-out, two-run home run in the ninth to make it a one-run game but could not complete the comeback.

Martinez (2-2) picked up the win, tossing five innings, allowing four runs (three earned) on four hits and two walks while striking out four. Iorio (6-4) suffered the loss, surrendering eight runs on 14 hits over four and two-thirds innings with two strikeouts. Victor Capellan collected his 12th save despite allowing two runs on two hits in one and one-third innings.

Castro completed his night with two hits, three RBIs and a run. Ford finished with three hits, an RBI and a run, while Romero added two hits, two RBIs, two runs and a walk.

The Ducks and FerryHawks wrap up their three-game set on Thursday night. Game time is slated for 6:35 p.m., with the Fairfield Properties Ballpark gates opening at 5:35 (5:20 for full season ticket holders). The first 1,500 fans in attendance will receive Ducks 4-Time Champions T-Shirts, courtesy of SCOPE Education Services. It’s also a Thirsty Thursday at the ballpark! Throughout the game, fans will be able to enjoy a special buy one, get one half-price offer on all Ebbs Beer throughout the game. In addition, the Duck Club restaurant/bar on the club level will be open for all fans to enjoy. Left-hander Bennett Parry (0-1, 7.36) toes the rubber for the Ducks against FerryHawks righty Dakota Freese (1-7, 4.16).