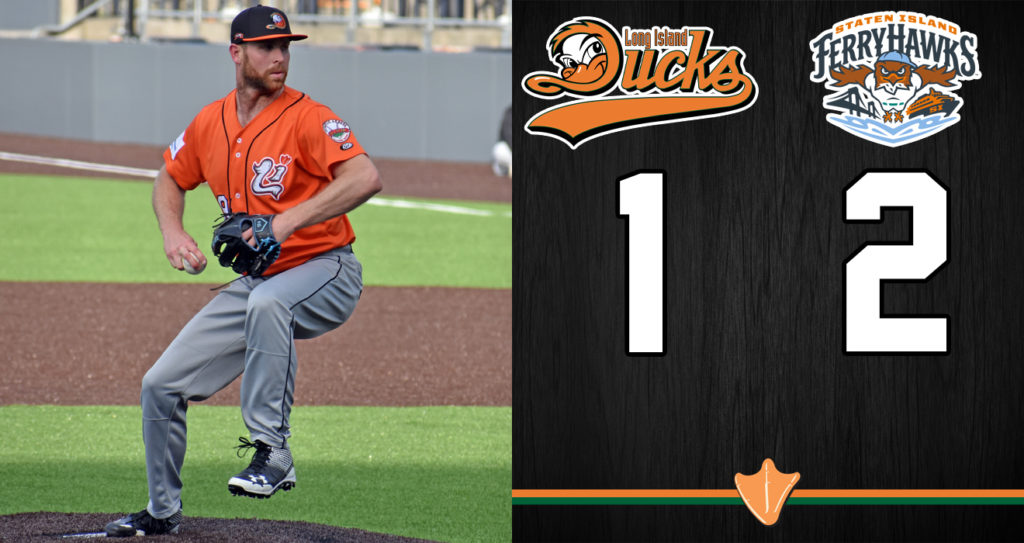 Long Island took a 1-0 lead in the top of the third inning against Staten Island starting pitcher Hector Guance thanks to an RBI fielder’s choice off the bat of Alejandro De Aza that scored Anfernee Seymour after he drew a walk with one man down. The FerryHawks tied the game at one versus Ducks starter Scott Harkin in the home half of the frame when Joseph Monge was erased at second base for out number two on a double steal attempt with runners at the corners on a strong throw down to Phil Caulfield by catcher Joe DeCarlo, but in the process Antoine Duplantis crossed the plate by hustling down the line from third base which enabled the home team to get even.

The contest then became a battle of the bullpens, and after Long Island did not drive home their extra runner at second base in the top of the tenth in pinch-runner Matt Chamberlain, Staten Island took advantage in the home half of the inning against Matt Carasiti. With the bases loaded and one away, Monge sent the FerryHawks fans home with smiles on their faces as he tallied a seeing-eye RBI infield single to the right side that plated pinch-runner Alfredo Reyes with the winning run which gave Staten Island the victory

Both starting pitchers tallied no-decisions in the ballgame, with Harkin allowing one run on four hits in five innings pitched, walking one and striking out five, while Guance surrendered one run on one hit in six innings on the mound, walking and striking out six. Vin Aiello (2-3) notched the win out of the bullpen with a scoreless inning on one hit allowed and two strikeouts. Carasiti (1-1) was tagged with the loss, giving up an unearned run on one hit in an inning and a third on the bump, walking one.

Seymour led the way for the Flock with a pair of hits, including a double, along with a walk and a run scored, and Deibinson Romero’s base knock in the sixth extended his on-base streak to a team-high 24 consecutive games overall.

The Ducks and FerryHawks continue their three-game set on Saturday night. First pitch is scheduled for 6:00 p.m. at Staten Island University Hospital Community Park. Fans can follow all the action on the Long Island Ducks Broadcast Network. Live streaming HD video and audio will be available via BoxCast on LIDucks.com as well as on the Ducks official Facebook page and YouTube channel. Right-hander Chris Cepeda (4-1, 3.38) takes the mound for the Ducks against FerryHawks southpaw Augie Sylk (5-9, 5.26).