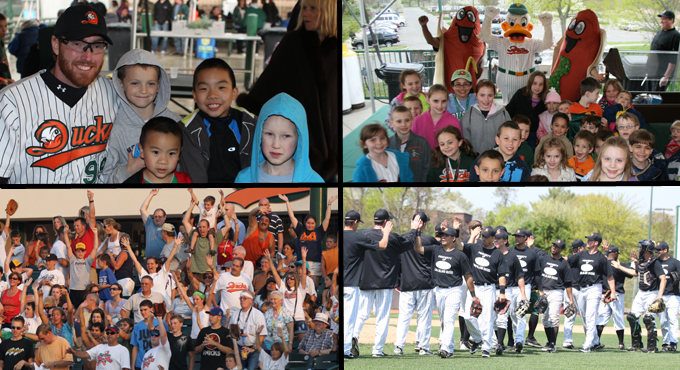 Join the Ducks for a fun-filled day at Bethpage Ballpark

(Central Islip, N.Y., March 21, 2013) – The Atlantic League champion Long Island Ducks today announced that they will be hosting the team’s first-ever Fan Fest at Bethpage Ballpark on Saturday, April 13. This will be the first chance for fans to see the defending champs take the field at the Duck Pond in preparation for the 2013 season, the team’s 14th on Long Island.

“This will be a day chock full of fun and excitement for fans of all ages,” says Ducks president and general manager Michael Pfaff. “Our fans and the entire organization are excited for the start of baseball season, and our Fan Fest will bring the ‘Faithful Flock’ closer to the team than ever before.”

The Fan Fest will begin at 10:30 a.m. and feature a variety of different events for fans to enjoy. Season Ticket Holders will be able to enjoy their annual season ticket holder barbeque, which will take place in the Hebrew National Picnic Area. VIP Season Ticket Holders attending the barbeque will be treated to an all-you-can-eat picnic along with visits from select Ducks players and coaches. Season ticket holders will also be able to pick up their VIP gifts anytime during the fan fest at the Newsday Customer Service Center.

Members of the Bethpage Federal Credit Union/Long Island Ducks Kids Club will be able to attend QuackerJack’s birthday party. The event will take place in the Smokin’ Al’s Party Deck, where members will get to sing “Happy Birthday” to the Ducks’ lovable mascot and enjoy hot dogs, cake and beverages.

The general public will be able to enjoy a host of fun activities taking place at Bethpage Ballpark. Fans can jump around in the Ducks Bounce House, see how fast they can throw at the Speed Pitch, make an everlasting memory in the Photo Booth and even try out their accuracy skills at the brand new Dunk Tank! The Waddle In Shop will also be open for fans to browse and purchase a wide selection of brand new championship-themed and other Ducks merchandise. Furthermore, 94.3 FM The Shark will be greeting fans on the plaza outside Bethpage Ballpark.

At approximately 12:45 p.m., fans will be introduced to the 2013 Long Island Ducks for the very first time as players and coaches line up along the first base line. Following introductions, the Ducks will take the field for a spring training game against the cross-sound rival Bridgeport Bluefish, with first pitch slated for 1:05. With the team leaving early for Texas this year, this will be the team’s only scheduled home preseason game so be sure to come out and cheer on Long Island’s hometown team before the season gets underway.