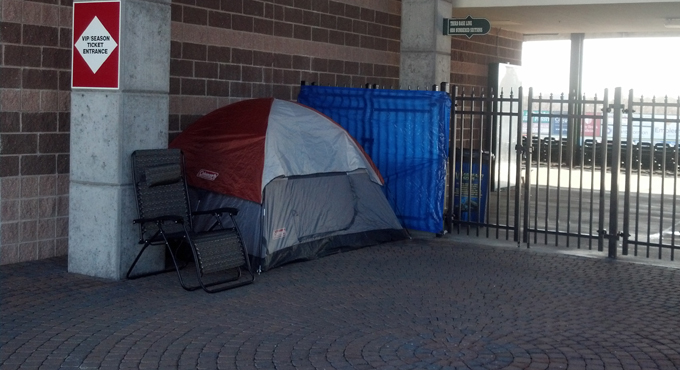 (Central Islip, N.Y., Mar. 13, 2013) – Baseball season is right around the corner, but the Kamer family has already arrived! On Wednesday morning, Ryan, Charlie and Michelle set up camp at Bethpage Ballpark, becoming the first fans in line for the annual Opening Day of Ticket Sales. The family has now been the first fans in line for four consecutive years, lining up a full 77 hours prior to the ticket windows opening at 10:00 a.m. on Saturday, March 16.

“As sure as Punxsutawney Phil signals the upcoming start of spring, the first fan arriving at the ballpark tells us it won’t be long before baseball season is upon us,” says Ducks president and general manager Michael Pfaff.

Stocked with a tent, sleeping bags and plenty of food and water, the Kamers staked their claim as “first fans in line” by setting up shop outside the West Gate of Bethpage Ballpark at 5:00 a.m. The family, who waited a record 143 hours in 2011 for Ducks tickets, is ready to watch the Flock defend their Atlantic League title in 2013. With a favorable weather forecast, the Ducks hope everyone will join the Kamers for all the fun and excitement this Saturday. For more information about the Opening Day of Ticket Sales, please CLICK HERE.

The Ducks today also announced the signings of pitchers Josh Lansford and Bill Murphy along with outfielder Rian Kiniry. Lansford returns for his second season with the Ducks after appearing in 31 regular season games for the Ducks in 2012. The righty posted 33 strikeouts in 38 innings of work before allowing just one run in three postseason games. The son of former Major Leaguer Carney Lansford, Josh has played seven seasons of professional baseball and boasts a career ERA of 3.69 and 182 strikeouts in 180 and two-thirds innings.

Murphy begins his first season on Long Island with two years of Major League experience, pitching for both the Arizona Diamondbacks and Toronto Blue Jays. In 18 big league games, he has a 4.08 ERA. Overall, the left-hander has played 11 seasons of professional baseball and has spent time in the Athletics and Marlins organizations as well. The 31-year-old spent the 2012 season with Las Vegas (AAA, Blue Jays) in the Pacific Coast League and went 8-5 with a 4.38 ERA in 28 games (15 starts).

Kiniry also enters his first season on Long Island after splitting time in 2012 with the York Revolution and Somerset Patriots in the Atlantic League as well as Arkansas (AA, Angels) in the Texas League. The speedy outfielder begins his seventh season of professional baseball and reached the Triple-A level in 2011. In 506 career games, the 26-year-old has 140 RBI, 50 doubles, 16 triples and 95 stolen bases.