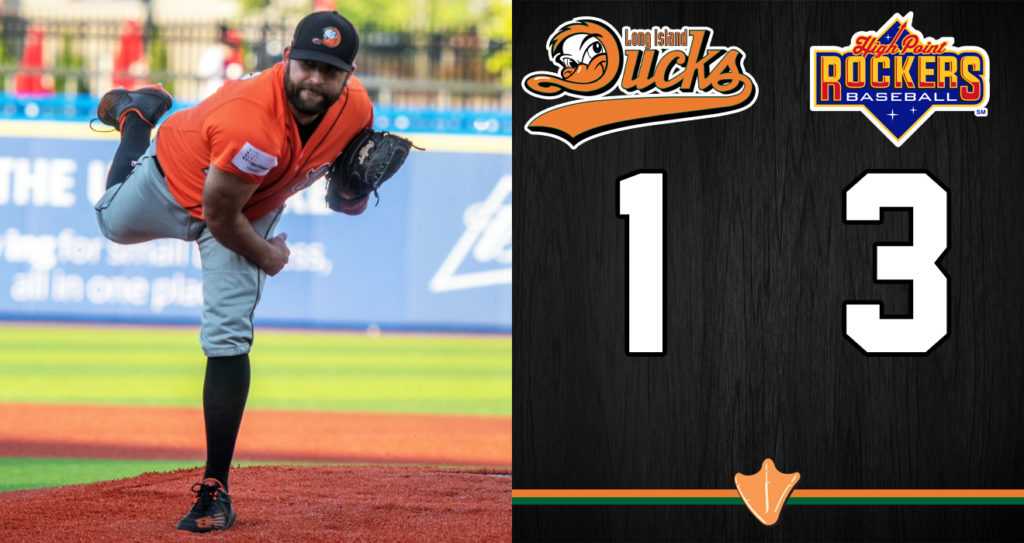 (High Point, N.C., May 3, 2022) – The Long Island Ducks were defeated by the High Point Rockers 3-1 on Tuesday night in the opener of a three-game series at Truist Point.

High Point took an early 3-0 lead in the first inning on Zander Wiel’s two-run home run and Quincy Latimore’s solo shot off Ducks starter Brett Kennedy. The Ducks answered back with their only run of the game in the second on Sam Travis’ RBI groundout off Rockers starter Justin Nicolino.

Nicolino (2-0) earned the win, tossing seven innings of one-run ball, allowing five hits and one walk with one strikeout. Kennedy (0-1) suffered the hard-luck loss, pitching six innings of three-run ball, yielding four hits and two walks while striking out five. Chasen Bradford picked up his second save of the season with a scoreless ninth inning. Brady Feigl and Joe Iorio combined to pitch two scoreless innings of relief, striking out three.

The Ducks and Rockers continue their three-game set on Wednesday night. First pitch is scheduled for 6:35 p.m. at Truist Point. Fans can follow all the action on the Long Island Ducks Broadcast Network. Live streaming HD video and audio will be available via BoxCast on LIDucks.com as well as on the Ducks official Facebook page and YouTube channel. Left-hander Bennett Parry (0-0, 4.50) takes the mound for the Ducks against a Rockers starter to be determined.