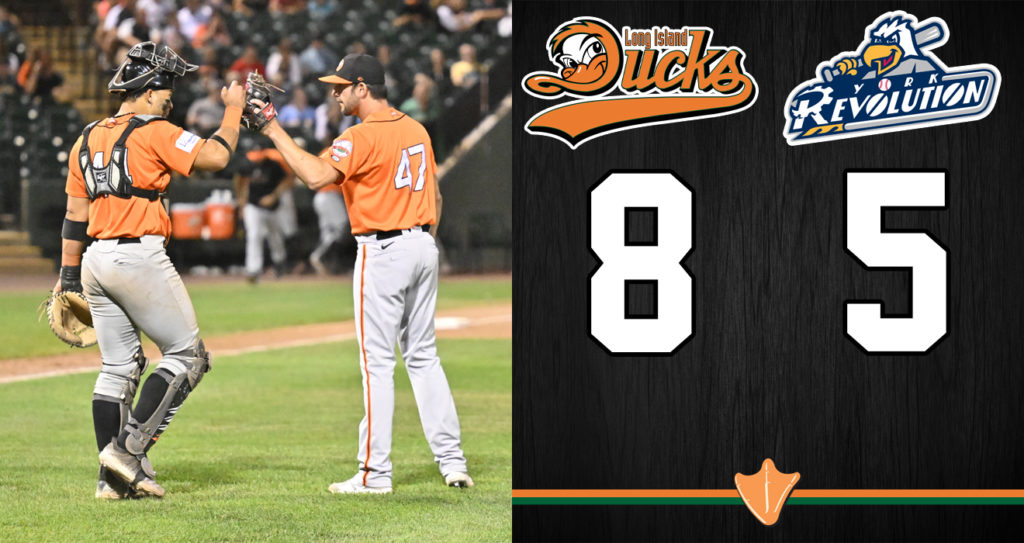 (York, Pa., Aug. 20, 2022) – The Long Island Ducks defeated the York Revolution 8-5 on Saturday night in the middle game of a three-game series at PeoplesBank Park.

Carlos Castro’s two-out RBI single in the first inning gave the Ducks an early 1-0 lead. York answered back to take a 2-1 lead in the bottom of the first on Telvin Nash’s RBI single and Yefri Perez’s RBI fielder’s choice. Long Island went back in front in the second on Phil Caulfield’s run-scoring groundout and Tzu-Wei Lin’s RBI double to right-center. However, a pair of Ducks throwing errors in the third scored Melky Mesa and Perez to put the Revolution back in front 4-3.

The Ducks took an 8-4 lead with a five-run fifth inning. Jose Sermo’s RBI double, Matt Chamberlain’s RBI single, Lin’s two-run double and Alejandro De Aza’s RBI single highlighted the inning. JC Encarnacion’s RBI single through the left side in the eighth closed the gap to 8-5, but York would get no closer.

Iorio (8-4) earned the win, tossing six innings, allowing four runs (two earned) on eight hits and a walk while striking out six. Travieso (6-6) suffered the loss, surrendering five runs on eight hits and five walks over four innings with two strikeouts. Matt Carasiti picked up his first save with a scoreless ninth inning, striking out two.

Lin led the Flock offensively with three doubles, three RBIs and a run. De Aza, Castro, Sermo and Chamberlain each chipped in with a pair of hits as well.

The Ducks and Revolution wrap up their three-game set on Sunday afternoon. First pitch is scheduled for 2:00 p.m. at PeoplesBank Park. Fans can follow all the action on the Long Island Ducks Broadcast Network. Live streaming HD video and audio will be available via BoxCast on LIDucks.com as well as on the Ducks official Facebook page and YouTube channel. Right-hander Scott Harkin (8-7, 4.91) toes the rubber for the Ducks against Revolution lefty Austin Nicely (3-10, 7.55).