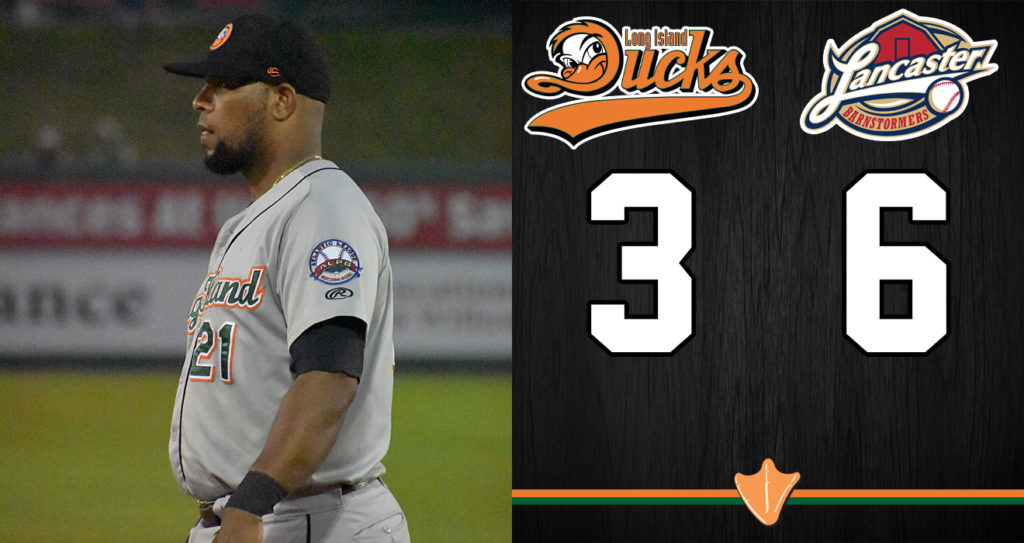 (Lancaster, Pa., May 10, 2022) – The Long Island Ducks were defeated by the Lancaster Barnstormers 6-3 on Tuesday night in the opener of a three-game series at Clipper Magazine Stadium.

The Ducks took an early 2-0 lead on RBI groundouts in the first and third innings by Vladimir Frias and Rusney Castillo, respectively, off Lancaster starter Dominic DiSabatino. The Barnstormers answered with five runs off Ducks starter Scott Harkin in the third to go in front 5-2. RBI singles by LeDarious Clark and Colton Shaver along with a three-run triple by Andretty Cordero did the damage.

Melvin Mercedes added a solo homer to right in the fourth, increasing Lancaster’s lead to four. Joe DeCarlo closed the gap to 6-3 in the sixth with a two-out RBI single to right field, but that would be all the scoring on the night.

DiSabatino (1-2) earned the win, tossing five innings of two-run ball, allowing five hits and one walk while striking out three. Harkin (1-2) took the loss, giving up six runs on 12 hits over five innings with six strikeouts. Scott Shuman picked up his third save of the season with a scoreless ninth inning.

Deibinson Romero, Sam Travis and DeCarlo each had two hits to lead the Flock offensively. Romero scored a run and drew a walk as well.

The Ducks and Barnstormers continue their three-game series on Wednesday night. First pitch is scheduled for 6:30 p.m. at Clipper Magazine Stadium. Fans can follow all the action on the Long Island Ducks Broadcast Network. Live streaming HD video and audio will be available via BoxCast on LIDucks.com as well as on the Ducks official Facebook page and YouTube channel. Right-hander Hunter Caudelle (1-0, 5.40) takes the mound for the Ducks against Barnstormers righty Brent Teller (1-1, 7.30).

Long Island returns home on Friday, May 13, to begin a three-game set with the High Point Rockers. Game time is slated for 6:35 p.m., with the Fairfield Properties Ballpark gates opening at 5:35 (5:20 for full season ticket holders). It’s an Angela’s Pizza Friday! If the K-Man on the Rockers strikes out during the game, fans will be able to redeem their game ticket for a $13 regular pie (normally $19) at Angela’s Pizzeria in Islip during the rest of the weekend. Tickets for the game, and all Ducks games, are available by visiting the Fairfield Properties Ballpark box office, calling (631) 940-TIXX or CLICKING HERE.