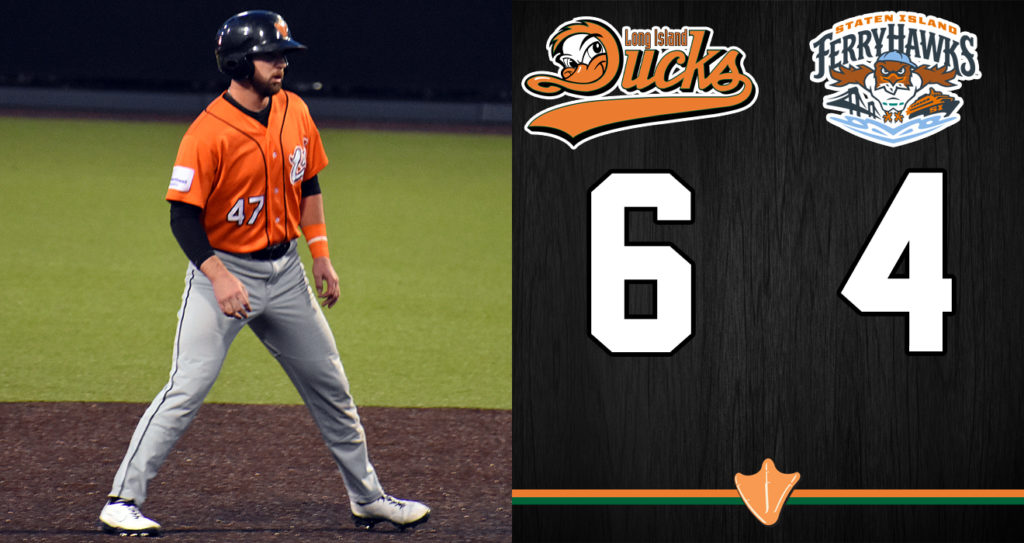 Deibinson Romero opened the scoring in the top of the first inning with a sacrifice fly to left field off FerryHawks starter Dylan Castaneda. A four-run second inning for the FerryHawks off Ducks starter Chris Pike gave the hosts a 4-1 lead. Mariel Bautista’s RBI double, Ramon Osuna’s RBI single and a two-run single by Javier Betancourt did the damage.

Trevor Achenbach closed the gap to two in the third with a long solo homer to center field. Long Island tied the game at four in the fourth on a wild pitch that scored Deibinson Romero and a two-out RBI single up the middle by Joe DeCarlo. The Ducks took their second lead of the night at 5-4 in the fifth on Romero’s two-out RBI double to left, and Matt Chamberlain stretched the advantage to two in the sixth with a solo homer to right.

Pike (1-0) earned the win, tossing six innings of four-run ball, allowing five hits and two walks while striking out four. Castaneda (2-1) took the loss, surrendering five runs on five hits and three walks over five innings with seven strikeouts. Tyler Webb recorded his 15th save of the season with a 1-2-3 ninth.

The Ducks and FerryHawks continue their three-game set on Saturday night. First pitch is scheduled for 6:00 p.m. at Staten Island University Hospital Community Park. Fans can follow all the action on the Long Island Ducks Broadcast Network. Live streaming HD video and audio will be available via BoxCast on LIDucks.com as well as on the Ducks official Facebook page and YouTube channel. Right-hander James Varela (1-2, 6.04) takes the mound for the Ducks against FerryHawks righty Christian Capuano (1-0, 4.50).