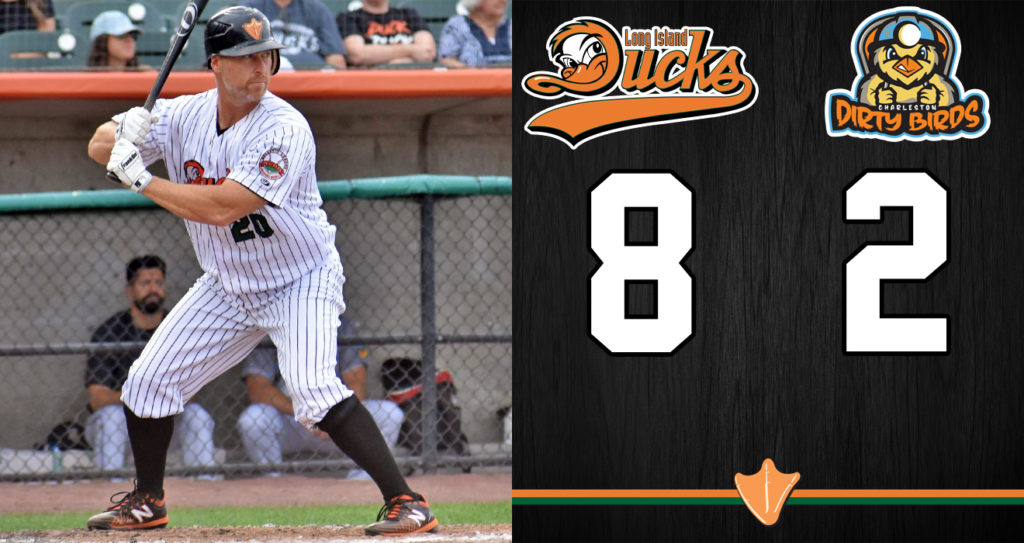 Charleston took a 2-0 lead in the third inning on Alfredo Gonzalez’s run-scoring groundout and Diego Goris’ RBI single to center off Ducks starter Chris Cepeda. An RBI single to left by Deibinson Romero off Dirty Birds starter Derrick Adams in the bottom of the third closed the gap to 2-1.

A three-run fourth inning put the Ducks in front 4-2. Joe DeCarlo’s solo homer to left and RBI singles by L.J. Mazzilli and Lew Ford highlighted the inning, with Ford’s single being the 1,000th hit of his Ducks career. He becomes the fourth player in Atlantic League history to reach the milestone (Bryant Nelson, Jeff Nettles and Ray Navarrete) and the first two do so entirely in a Ducks uniform.

Romero added an RBI single to center in the seventh to make it a 5-2 game. A three-run eighth, highlighted by Anfernee Seymour’s two-run single and Phil Caulfield’s RBI single, rounded out the scoring.

The Ducks continue their homestand on Tuesday night when they open a three-game series against the Lancaster Barnstormers. Game time is slated for 6:35 p.m., with the Fairfield Properties Ballpark gates opening at 5:35 (5:20 for full season ticket holders). It’s a Triple Play Tuesday! If the Ducks turn a triple play during the game, one lucky fan will win $25,000. Simply sign up prior to first pitch at the Ticket Kiosk on the main concourse to be eligible. Right-hander (5-9, 5.75) gets the start for the Ducks against Barnstormers righty Cameron Gann (6-8, 5.69).