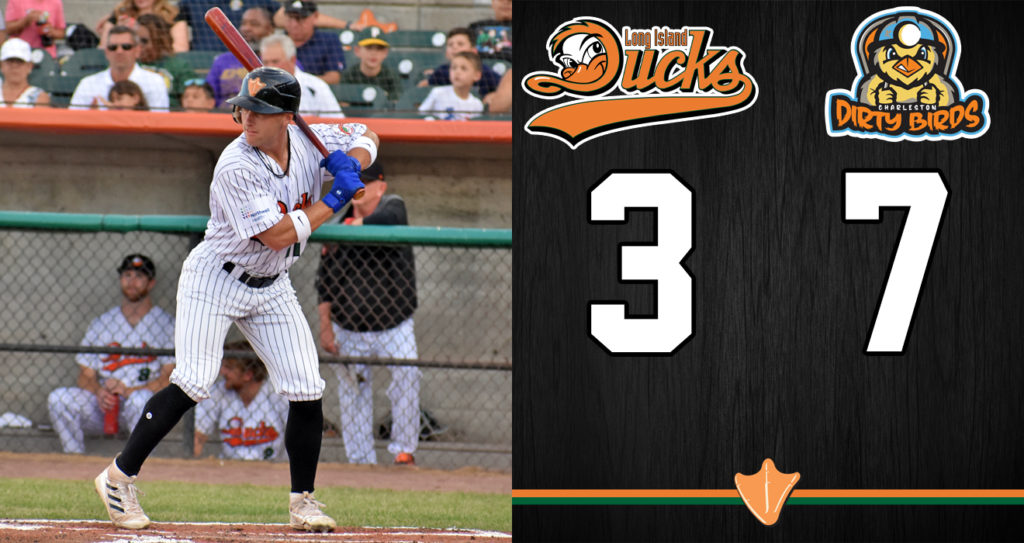 (Central Islip, N.Y., Aug. 12, 2022) – The Long Island Ducks were defeated by the Charleston Dirty Birds 7-3 on Friday night in the opener of a three-game series at Fairfield Properties Ballpark.

Charleston took an immediate 1-0 lead when Anfernee Seymour led off the ballgame with a solo home run to left field off Ducks starter Stephen Tarpley. A throwing error on a sac bunt that scored Diego Goris and a sacrifice fly to left off the bat of Yovan Gonzalez in the second extended the Dirty Birds advantage to three.

Long Island closed to within 3-2 in the third on a passed ball that scored Phil Caulfield and Carlos Castro’s RBI double to left-center off Dirty Birds starter Denson Hull. The Ducks then tied the game at three in the fifth on a sac fly to left by Deibinson Romero.

The Dirty Birds went back in front for good with a four-run seventh inning. RBI singles by Yovan Gonzalez, Scott Burcham and Alfredo Gonzalez, along with a sac fly from Seymour, did the damage.

Hull did not factor into the decision but lasted four innings, allowing three runs (one earned) on six hits and three walks with one strikeout. Ryan Lawlor (6-2) got the win with a scoreless inning of relief, striking out two. Tarpley (4-6) suffered the loss, surrendering six runs (four earned) on six hits over six innings with eight strikeouts.

The Ducks and Dirty Birds continue their three-game set on Saturday night. Game time is slated for 6:35 p.m., with the Fairfield Properties Ballpark gates opening at 5:35 (5:20 for full season ticket holders). It’s Breast Cancer Awareness Night, presented by Decision Women in Commerce and Professions. Following the game, all fans in attendance will be treated to a Fireworks Spectacular. The team will also be wearing special pink jerseys throughout the game, which will be auctioned off via the LiveSource mobile app and website. Proceeds will benefit the various breast cancer awareness organizations and coalitions in attendance. Right-hander Akeel Morris (4-9, 6.21) takes the mound for the Ducks against Dirty Birds righty Alec Kisena (0-1, 12.96).