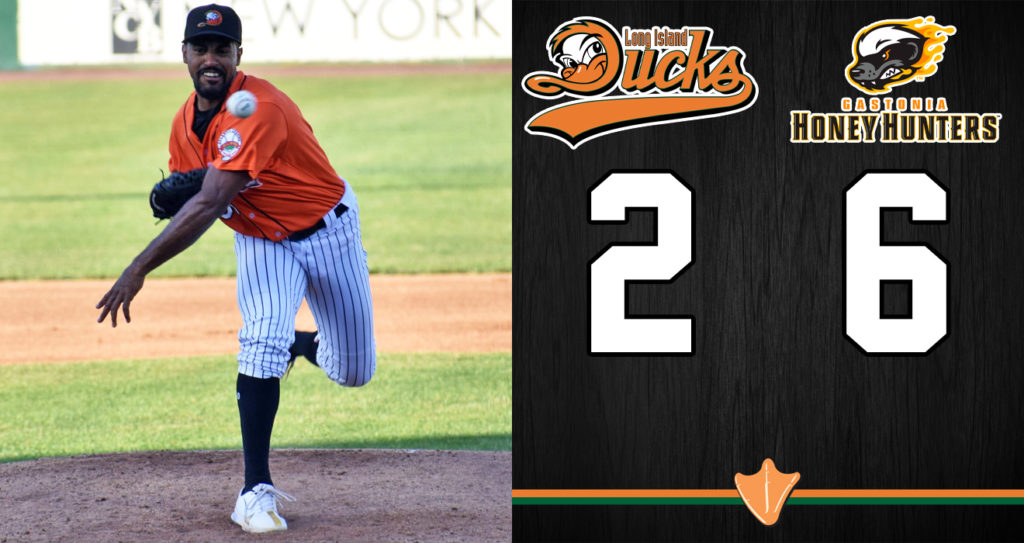 (Central Islip, N.Y., May 30, 2022) – The Long Island Ducks were defeated by the Gastonia Honey Hunters 6-2 on Monday afternoon in the final game of a four-game series at Fairfield Properties Ballpark.

The Honey Hunters took a 2-0 lead in the second inning on Stuart Levy’s two-run single up the middle off Ducks starter Stephen Tarpley. The Ducks closed to within one in the third on Alejandro De Aza’s RBI single to right off Honey Hunters starter Jerry Keel.

It remained that way until the top of the ninth when Gastonia plated three runs to extend their advantage to 5-1. A fielding error that plated two runs, an RBI single by Rayder Ascanio and a sac fly to left off the bat of Joseph Rosa did the damage. Vladimir Frias’ RBI single in the bottom of the ninth rounded out the scoring.

Keel (3-1) earned the win, tossing five innings of one-run ball, allowing seven hits and two walks with two strikeouts. Tarpley (0-2) suffered the hard-luck loss, yielding just two runs (one earned) on four hits and two walks over five innings while striking out nine, the most by a Ducks pitcher in a single game this season. Sam Bordner picked up his second save of the season with two innings of relief, yielding a run on two hits and a walk.

Frias, Deibinson Romero and Dustin Woodcock each had two hits to lead the Flock. Frias drove in a run and scored a run, while Romero and Woodcock both added a walk.

The Ducks hit the road on Tuesday night to open a three-game series against the Honey Hunters. First pitch is scheduled for 6:15 p.m. at CaroMont Health Park. Fans can follow all the action on the Long Island Ducks Broadcast Network. Live streaming HD video and audio will be available via BoxCast on LIDucks.com as well as on the Ducks official Facebook page and YouTube channel. Right-hander Hunter Caudelle (1-1, 8.44) gets the start for the Ducks against Honey Hunters righty Reilly Hovis (1-1, 4.62).