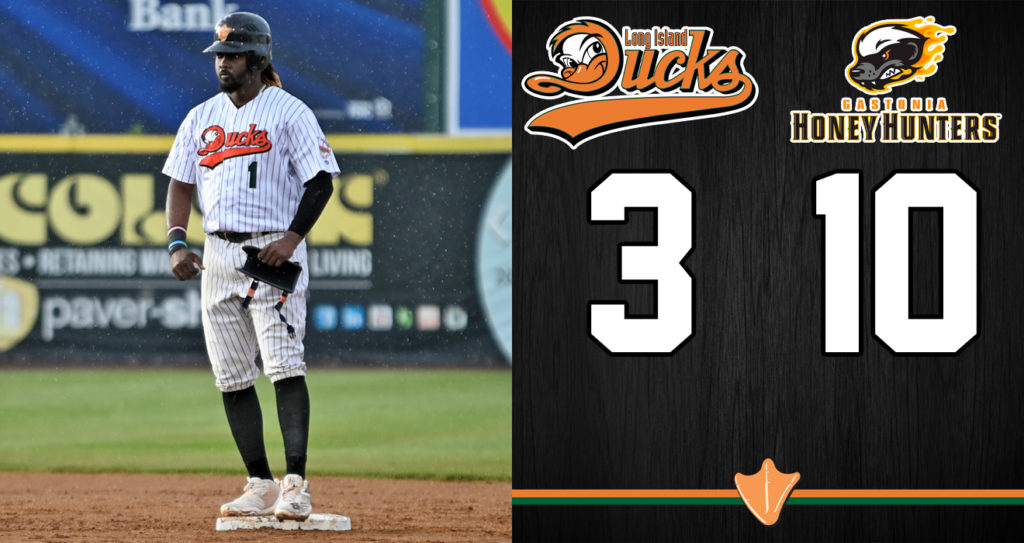 (Central Islip, N.Y., May 28, 2022) – The Long Island Ducks were defeated by the Gastonia Honey Hunters 10-3 on Saturday night in the second game of a four-game series at Fairfield Properties Ballpark.

The Honey Hunters went back in front on another sac fly off the bat of Tapia in the third. Reece Hampton extended Gastonia’s lead to 6-3 in the sixth with a two-run home run to right. Another three-spot for the visitor’s in the eighth on Herlis Rodriguez’s solo homer and a two-run single by Rosa made it 9-3. A run-scoring wild pitch in the ninth rounded out the scoring.

Anderson (3-3) picked up the win, tossing five and one-third innings of three-run ball, allowing six hits and three walks with one strikeout. Morris (0-4) took the loss, giving up four runs on five hits and four walks over five innings with five strikeouts.

The Ducks and Honey Hunters continue their four-game series on Sunday afternoon. Game time is slated for 1:35 p.m., with the Fairfield Properties Ballpark gates opening at 12:35 (12:20 for full season ticket holders). It’s a Sunday Family Funday, presented by Bethpage Federal Credit Union! Prior to the game, fans will be invited down for a Catch on the Field from 12:40 to 1:00. After the game, fans of all ages are also invited to take part in Kids Run the Bases. Right-hander Joe Iorio (4-0, 2.75) toes the rubber for the Ducks against Honey Hunters righty Marcus Walden (2-0, 3.30).