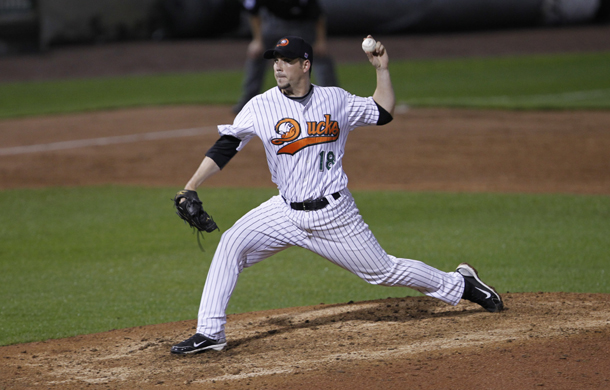 Pitches in big leagues for first time since 2008


(Central Islip, N.Y., June 26, 2012)
– Former Ducks pitcher Justin Hampson officially made his return to the Major Leagues on Monday night, pitching in relief for the New York Mets against the Chicago Cubs at Wrigley Field. Hampson then followed his scoreless inning with some commentary on his time with the Ducks and his experience on Long Island during his journey back to Major League Baseball.

“I had a great time there,” said Hampson in an interview published in Wednesday’s edition of Newsday. “I wish I would have not had the shoulder flare up and had a longer experience there. It was a good time. Buddy Harrelson was there. It was surreal to see him. Dave LaPoint was the manager there. It was cool. The crowd was — they really pack it in there. It’s a cool stadium and a good experience. First time I’d been in the New York area.” For the full article in today’s Newsday, CLICK HERE.

The left-hander, who pitched with the Ducks during the 2010 season, threw a scoreless eighth inning, allowing just one hit while striking out a batter as well. It marked the first time that Hampson pitched in the big leagues since September 28, 2008 as a member of the San Diego Padres. That season, he went 2-1 with a 2.93 ERA in 35 games out of the bullpen, striking out 19 batters in 30 and two-thirds innings.