HARKIN AND CO. SHUT OUT STATEN ISLAND ON FOURTH OF JULY 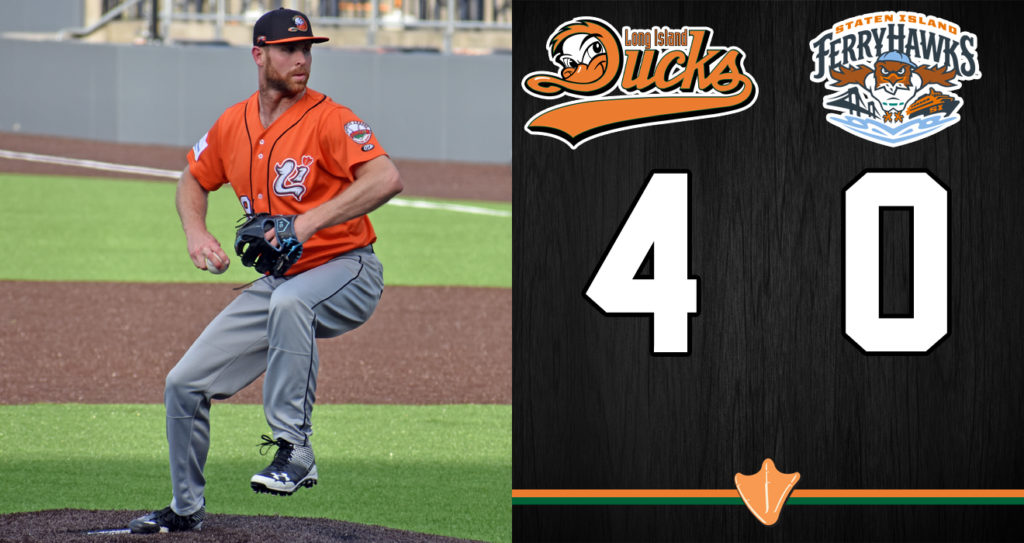 The Ducks opened the scoring in the second inning when Sam Travis raced home from third to score on L.J. Mazzilli’s groundout to FerryHawks starter Dakota Freese. Back-to-back RBI singles by Alejandro De Aza and Travis in the third extended Long Island’s advantage to 3-0. Rusney Castillo’s sacrifice fly to right in the fifth scored Joe DeCarlo to make it a 4-0 ballgame.

Travis led the Ducks offensively, with a hit, an RBI, a run and three walks.

The Ducks and FerryHawks wrap up their two-game set on Tuesday night. First pitch is scheduled for 6:30 p.m. at Staten Island University Hospital Community Park. Fans can follow all the action on the Long Island Ducks Broadcast Network. Live streaming HD video and audio will be available via BoxCast on LIDucks.com as well as on the Ducks official Facebook page and YouTube channel. Right-hander Akeel Morris (4-4, 5.46) takes the mound for the Ducks against FerryHawks lefty Anthony Rodriguez (2-4, 7.01).

Long Island returns home on Wednesday, July 6, to begin another two-game set with the FerryHawks. Game time is slated for 6:35 p.m., with the ballpark gates opening at 5:35 (5:20 for full season ticket holders). It’s a Waddle In Wednesday at the ballpark! Fans will be able to enjoy a special $5 off deal on Ducks Street Signs in the Waddle In Shop throughout the ballgame ($15, normally $20). Tickets for the game, and all Ducks games, are available by visiting the Fairfield Properties Ballpark box office, calling (631) 940-TIXX or CLICKING HERE.