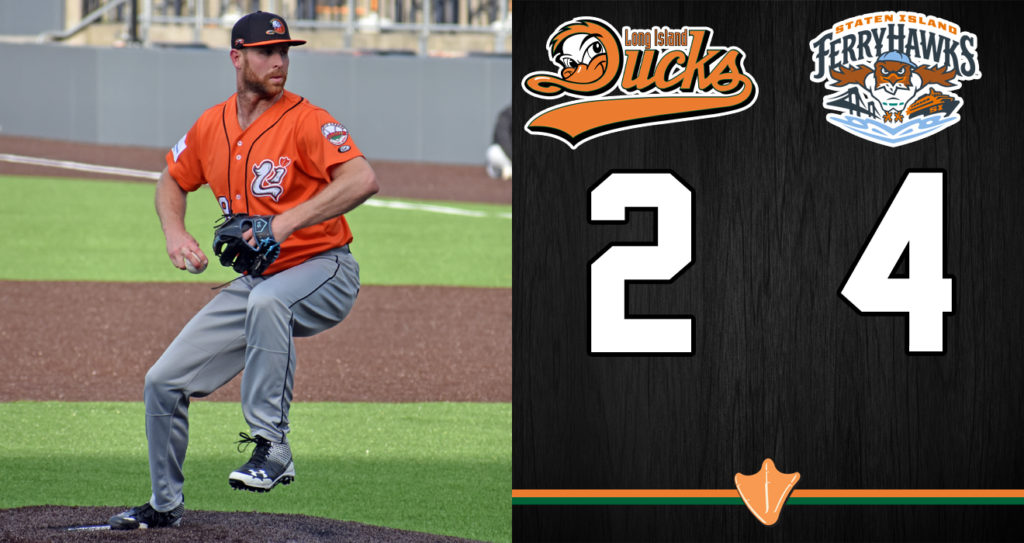 (Staten Island, N.Y., June 11, 2022) – The Long Island Ducks were defeated by the Staten Island FerryHawks 4-2 on Saturday night in the middle game of a three-game series at Staten Island University Hospital Community Park.

The Ducks took a 2-0 lead in the first inning on Sam Travis’ RBI single to left field and Rusney Castillo RBI double to right off FerryHawks starter Anthony Auletta. The FerryHawks closed the gap to 2-1 in the bottom of the first on Angel Aguilar’s solo home run to left-center off Ducks starter Scott Harkin.

It stayed that way until the bottom of the eighth when Staten Island batted around and scored three runs to take a 4-2 lead. A throwing error by Joe DeCarlo allowed Joseph Monge to score the tying run, and bases loaded walks by Stephen Alemais and John Nester put the FerryHawks in front.

Auletta did not factor into the decision but lasted five innings, allowing two unearned runs on five hits and a walk with five strikeouts. Joe Kuzia (2-2) picked up the win with a 1-2-3 eighth inning. Harkin (3-4) suffered the hard-luck loss, yielding three runs (two earned) on seven hits over seven and two-thirds innings while striking out five. Victor Capellan collected his fifth save with a 1-2-3 ninth inning.

Castillo and Johnni Turbo each had two hits to lead the Flock offensively.

The Ducks and FerryHawks wrap up their three-game series on Sunday afternoon. First pitch is scheduled for 4:00 p.m. at SIUH Community Park. Fans can follow all the action on the Long Island Ducks Broadcast Network. Live streaming HD video and audio will be available via BoxCast on LIDucks.com as well as on the Ducks official Facebook page and YouTube channel. Right-hander Anderson DeLeon (2-1, 3.96) toes the rubber for the Ducks against FerryHawks righty Nick Carrell (0-1, 8.10).