HERO MAKERS HONORED AS “HEROES IN THE COMMUNITY” 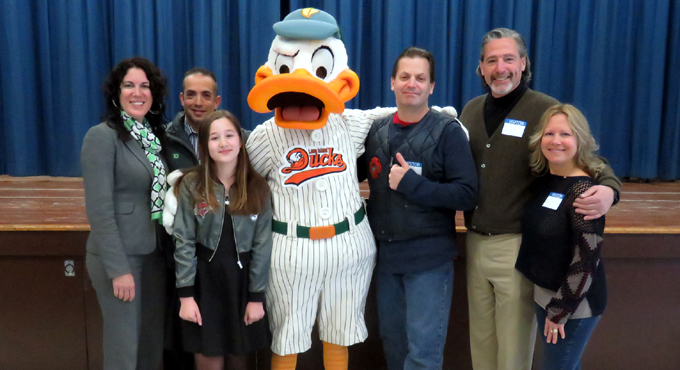 (Dix Hills, N.Y., March 22, 2017) – On Wednesday, the Long Island Ducks descended upon Paumanok Elementary School for the team’s final TD Bank “Take a Duck to Class” essay contest visit of the season. Fourth grade student Abigail Huners won an hour-long visit from the Ducks thanks to writing a fabulous essay on Panico’s Community Market in Smithtown, who she chose as her “hero in the community.”

The day began with an assembly for the entire fourth grade class, emceed by Ducks Assistant GM/Senior VP of Sales Doug Cohen. After explaining the contest to the students and congratulating Abigail, the lucky winner stood front and center in the auditorium and read her essay out loud. The piece spoke beautifully about the market’s Heros for Heroes program, in which the market makes thousands of sandwiches for firefighters, police officers and veterans on Long Island every year. Market owner Donato Panico first distributed sandwiches at Ground Zero immediately after September 11, and he has since continued the charitable act.

After reading the essay, Abigail was joined by Panico and other representatives from the market. They all expressed their gratitude for choosing them as her hero and let the students know that they can do anything they put their mind to. Next, TD Bank representatives Eric Fishon and Rosalie Facciponti passed along their congratulations for a job well done and presented Abigail with a $50 Visa gift card. Finally, QuackerJack was welcomed by the students to cheers and applause.

Following some photos and interviews with local media, Abigail and her class were treated to a special visit in their classroom from QJ. The seven-time “Best Long Island Mascot” signed autographs for everyone, posed for pictures and answered questions with the help of Ducks staff members.

TD Bank “Take a Duck to Class” essay contestants were able fill out applications on LIDucks.com this fall and submit an essay of 250 words or less on the theme “Who is a hero in your community and why?” Four lucky winners were selected from an entry pool that included thousands of essays. Each winner received an hour-long visit to their school from QuackerJack and the Ducks as well as a Visa gift card from TD Bank.

Here are the four winners who were recognized in this year’s TD Bank “Take a Duck to Class” essay contest: