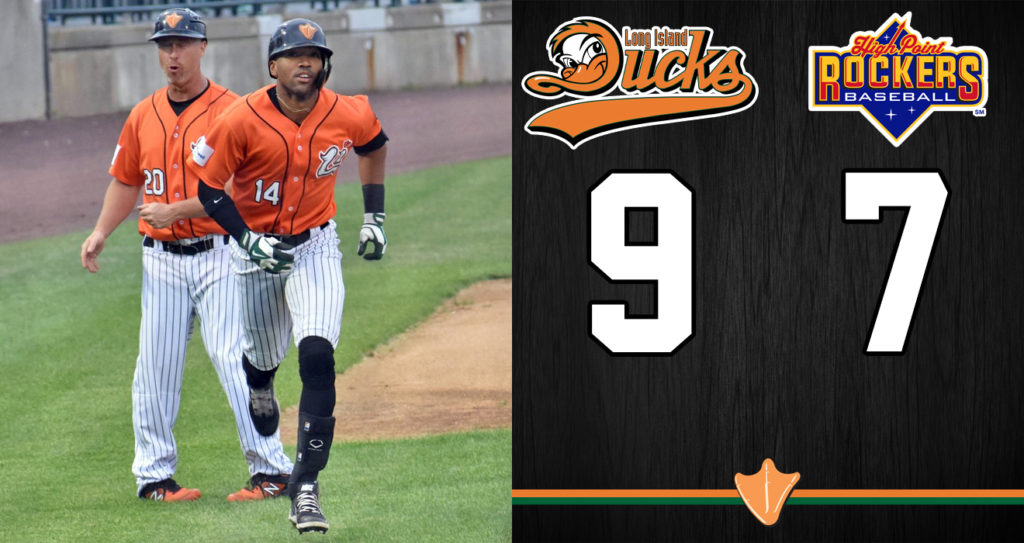 Johnni Turbo gave the Ducks an immediate 1-0 lead with a leadoff solo home run to left field in the bottom of the first inning off Rockers starter Jonah Scolaro. Turbo’s two-out RBI single to right in the second doubled the Ducks lead to two.

Two more runs came home for Long Island in the third on Deibinson Romero’s RBI double to center and Vladimir Frias’ RBI infield single to third. Zander Wiel got the Rockers on the scoreboard in the fourth with a leadoff solo homer to left-center off Ducks starter Joe Iorio. However, a trio of runs scored for the Ducks in the bottom of the fourth increased the Ducks advantage to 7-1. Turbo scored on a wild pitch, Sam Travis lined an RBI single to left and Joe DeCarlo lifted a sacrifice fly to center.

High Point closed to within 7-3 in the fifth on RBI singles by Logan Morrison and Ben Aklinski. Long Island got the runs back though in the bottom of the frame on L.J. Mazzilli’s RBI single and a passed ball that plated Turbo. The Rockers rallied for four runs in the ninth on Morrison’s RBI single to left and Wiel’s three-run homer to left, but they were unable to pull even.

The Ducks and Rockers continue their three-game set on Wednesday night. Game time is slated for 6:35 p.m., with the Fairfield Properties Ballpark gates opening at 5:35 (5:20 for full season ticket holders). It’s a Waddle In Wednesday at the ballpark! Fans will be able to enjoy $2 off all QuackerJack Lunch Boxes ($10, normally $12) in the Waddle In Shop throughout the ballgame. Left-hander Stephen Tarpley (1-3, 3.73) takes the mound for the Ducks against a Rockers starter to be determined.