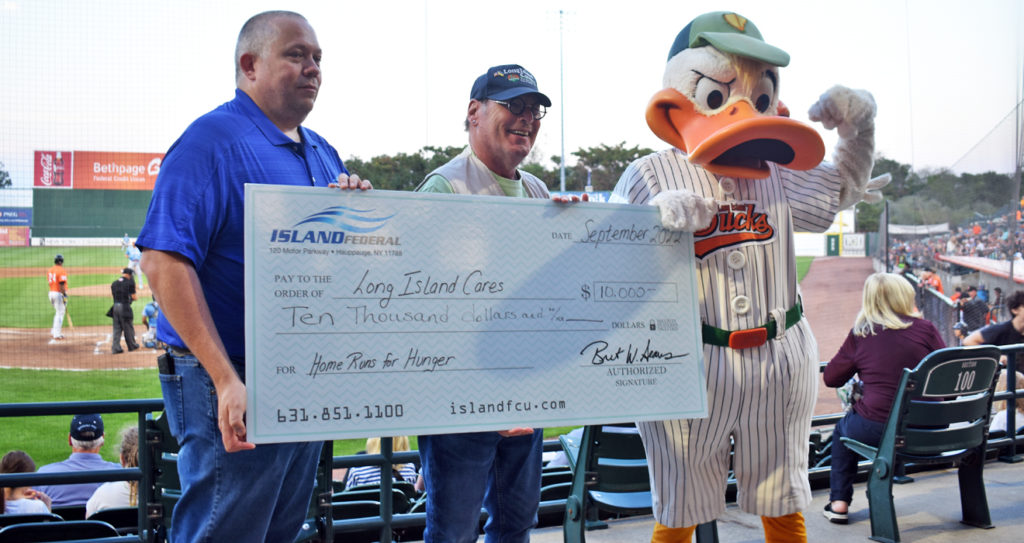 Every time a Ducks player launched a home run this year, Island Federal made a $100 donation to Long Island Cares, in an effort to help improve food security for families on Long Island. Because the Ducks have launched over 100 homers as a team, Island Federal has donated $10,000 to Long Island Cares. Representatives from both organizations were in attendance during the Ducks game against the Staten Island FerryHawks on September 10 to celebrate the success of the program.

“Working with like-minded partners that are dedicated to the community like Island Federal Credit Union and Long Island Cares, we are excited to have taken part in having a positive impact on Long Island’s food insecure population,” said Ducks President/GM Michael Pfaff.

“We are excited to partner with the Ducks, because they represent a family-friendly organization that helps to make Long Island a great place to live and raise a family,” commented Bret W. Sears, President/CEO, Island Federal.

Chris Murray, Island Federal VP/Marketing added, “For more than a decade, Island Federal has supported Long Island Cares in its mission to combat hunger on Long Island. Currently, there are more than 259,000 Long Islanders who remain food insecure, nearly a third of whom are children. Now working with the popular Ducks, we will not only donate to this worthy organization but also make more Long Islanders aware of the critical issue of food insecurity here at home.”